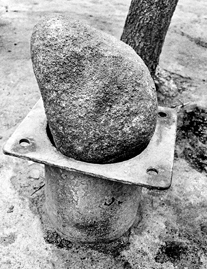 In October 2005, the Planning Commission created an expert group headed by its energy and water member, Kirit Parikh, to review the groundwater situation. Its abovementioned report, released on September 18, warns of a crisis groundwater demand is likely to outstrip availability by 2050. It has a few bits incriminating urbanisation and industrialisation. But Himanshu Kulk-arni of Pune-based ngo Advanced Centre for Water Resources Develop-ment and Management, says, "On such matters, it has reproduced old Central Ground Water Board (cgwb) data."
The report commends the artificial recharge movement across the country to augment groundwater. It also speaks well of programmes to repair water bodies and schemes under the National Rural Employment Guarantee Act, 2006. The experts suggest that the central government fund technical studies on artificial recharge. But they turn a blind eye to the fund crunch faced by recharge schemes. For example, in 2002 cgwb proposed a Rs 24,500-crore scheme to recharge 36 billion cubic metres of water. Funding constraints have meant that only 165 of 3.9 million structures planned were constructed.

The report also gets flak for neglecting groundwater-linked ecosystems. Himanshu Thakkar of the South Asian Network on Dams, Rivers and People, says, "It ignores recharge sources like rivers and traditional water harvesting systems."
The report comments that a model bill circulated by cgwb in the early 1970s to control groundwater use remained a dead letter because it was iniquitous and difficult to enforce. Only seven states and a union territory have legislated on groundwater--Punjab, one of the worst in groundwater extraction, hasn't.

The expert group also counsels against making groundwater government property. It, however, recommends that extraction rights be curbed if found excessive. K V Raju of the Institute of Social and Economic Change, Bangalore says "this requires giving local bodies with adequate powers". The report is equal to this task. It recommends that the regulator's work be delegated to a committee constituted by panchayats, with cgwb as a facilitator. The experts also note, "Implementation of such cooperative schemes raises questions...including equity in principle and practice, efficient use, and...transparent institutions and hence need to be piloted." They suggest "government incentives for community management of new wells, construction of recharge structures...and...micro irrigation."

These measures with rationalised electricity tariffs would make for good demand-side management, the experts believe. But unlike many experts, the report doesn't recommend metering or hiking tariff, which will burden small farmers without appreciably affecting groundwater use. Instead, they recommend farmers "be given an entitlement of say, Rs 6,000 corresponding to 3,000 kwhr at Rs 2/kwhr. Actual consumption charges can be deducted and the surplus, if any, can be returned."

Parikh says the committee deliberately focussed on the agricultural sector since it uses over 80 per cent of groundwater. But R Ajayan, convenor of a committee agitating against a Coca-Cola plant in Palakkad district of Kerala, says, "Not focussing on industry is deliberate." And it's a serious omission, given complaints of groundwater abuse by industry in many places.

The report also ignores a recent Union ministry of water resources report (see 'Partial fix', Down To Earth, August 15, 2007) which suggested stringent policy instruments to check overuse of groundwater. There are no suggestions on refining ground-water assessment. Kulkarni says, "Communities must have basic aquifer-related information to manage groundwater."

It remains to be seen what action is taken. As Thakkar says, "In the 11th plan, 80 per cent of water resources allocations are for large irrigation projects, so states do not take groundwater seriously." The government should consider reform to get states to act.