The Frontiers Report 2019, released on March 4, has included a chapter on nitrogen pollution 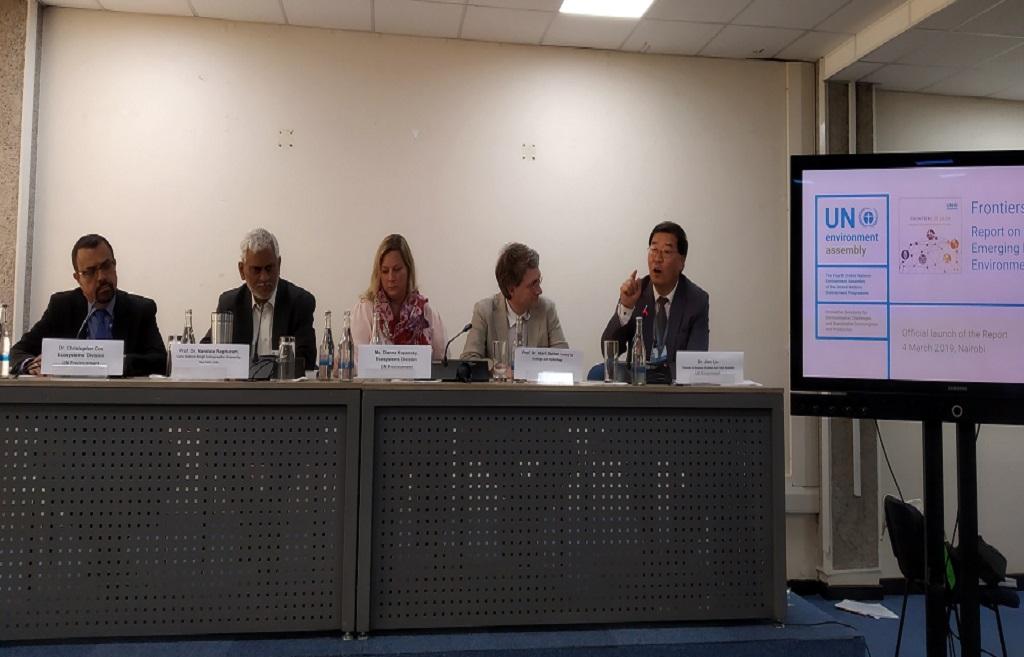 The annual Frontiers report 2019 published by the United Nations (UN), has included a chapter on nitrogen pollution in its latest edition, in a sign that pollution caused by the reactive forms of nitrogen is now being recognised as a grave environmental concern on a global level.

The report, released by the United Nations Environmental Assembly (UNEA) in Nairobi on March 4, 2019, highlights that “growing demand on the livestock, agriculture, transport, industry and energy sector has led to a sharp growth of the levels of reactive nitrogen — ammonia, nitrate, nitric oxide (NO), nitrous oxide (N2O) — in our ecosystems.”

Some of these forms of nitrogen like N2O can have far reaching impacts for humanity. N2O is 300 times more potent as a greenhouse gas than carbon dioxide (CO2). The Frontiers report claims that the total annual cost of nitrogen pollution to eco system and healthcare services in the world is around $340 billion.

Nitrogen is essential to all life on Earth as it forms an important component of life-building and propagating biochemical molecules like proteins. But overuse in agriculture in the form of fertilisers and other fields have made this important element more bane than boon.

This is why many scientists including N Raghuram, who is the current chairman of the International Nitrogen Initiative (INI), have called nitrogen the “new carbon”. They also want the international community to work on both issues simultaneously.

The Frontiers report also warns that “the scale of the problem remains largely unknown and unacknowledged outside scientific circles.”

In 2017, a large team of Indian scientists under the leadership of Raghuram, had come out with The Indian Nitrogen Assessment (INA). With the Assessment’s publication, India had become the third country/entity after the United States and the European Union to have assessed the environmental impact of nitrogen on their respective regions comprehensively.

The INA shows that agriculture is the main source of nitrogen pollution in India. Within agriculture, cereals pollute the most. Rice and wheat take up the maximum cropped area in India at 36.95 million hectares (ha) and 26.69 million ha respectively;

India consumes 17 Mt (million tonnes) of nitrogen fertiliser annually as per the data of the Fertiliser Association of India. Only 33 per cent of the nitrogen that is applied to rice and wheat through fertilisers is taken up by the plants in the form of nitrates (NO3). This is called Nitrogen Use Efficiency or NUE.

The remaining 67 per cent remains in the soil and seeps into the surrounding environment, causing a cascade of environmental and health impacts. The European assessment puts an even higher number on such wasted agricultural nitrogen resources at 80 per cent.

But the scenario is changing and governments are also taking steps towards dealing with nitrogen pollution. Recently, the United Kingdom invested of £20 million (Rs 187.51 crore) for research on nitrogen pollution and its consequences for the South Asian region.

“The premise of this project is that regional (nitrogen) assessment provides the much-needed depth and well-grounded policy underpinnings for global processes (both science and policy processes), which should facilitate global cooperation,” Raghuram told Down to Earth.

The Indian government is also leading a resolution on nitrogen pollution in the UNEA in Nairobi that starts from March 11. This is a historic event as India has never pushed for a resolution of such importance at any UN congregation before.

And this has happened because “India can now leverage its own nitrogen assessment and its strong support to South Asian and other regional assessments as a part of its highly respected legacy of inclusive approach globally, to lead a process for faster global consensus and a more realistic programme of action”, says Raghuram.

But more needs to be done.  For example, in India, “nitrogen pollution in water is already monitored, but it would be nice to have tighter regulations on nutrient effluents, especially from livestock farms, municipalities and hotels near water bodies, keeping in mind that different ecosystems have different levels of sensitivities to nutrient pollution” says Raghuram.

For example, the requirements for coral reefs, mangroves, and other marine/freshwater ecosystems are very different, as are potable water bodies and recreational water bodies.

The Frontiers report also says that the past efforts to engage with all forms of reactive nitrogen have been fragmented, which can also be seen in the policies promulgated by various countries regarding nitrogen pollution.

Bringing together nitrogen pollution and benefits under one framework will help in calculating the tradeoffs between the two and informing governments and the public about the total societal cost of using nitrogen.

For this, the authors of the Frontiers report suggest that all the policy frameworks, which deal with nitrogen, should be studied and a single framework like the one that exists for carbon should be built. They also call for an international convention and forum for the discussion on nitrogen.