The National Green Tribunal (NGT) seems to have stepped on the peddle: through April 7, 2019 it has slapped penalties worth almost double the fines it sought in the whole of 2018. This includes the big-ticket Rs 500 crore fine on major carmaker Volkswagen. Governments weren't spared either.

Between this January and April 7 the NGT slapped penalties close to Rs 873 crore under the ‘polluter pays’ principle. For the entire 2018, the tribunal had imposed penalties of Rs 477 crore under the principle (excluding Rs 500 crore the Karnataka government had to put in escrow).

Multinational carmaker Volkswagen's Indian arm and the governments of Andhra Pradesh, Meghalaya and Tamil Nadu had the highest penalties imposed on them so far in 2019.

Volkswagen was ordered to pay Rs 500 crore for using a cheat device that showed the emission level within the permissible limit instead of the actual emission level.

The NGT slapped Andhra Pradesh and Meghalaya governments with penalty of Rs 100 crore each for not preventing illegal mining of sand and coal. It also imposed a fine of Rs 100 crore on Tamil Nadu for failing to control pollution and not restoring Chennai’s waterways.

In 2018, Pune-based Goel Ganga Developers India Pvt Ltd, a construction company, Volkswagen and Karnataka government were asked to pay the most.

On November 16, 2018, the NGT accused Volkswagen of using the cheat device in diesel cars (which was proved in March 2019) and ordered it to deposit an interim amount of Rs 100 crore with the Central Pollution Control Board (CPCB).

In August 2018, the Supreme Court ordered the Pune real estate firm to pay Rs 105 crore for causing environmental damage at its Ganga Bhagyodaya, Amrut Ganga and Ganga Towers projects on Sinhagad Road. The apex court passed this order by overruling the NGT order, which had asked the construction company to pay Rs 195 crore.

In December 2018, the Karnataka government and Bruhat Bengaluru Mahanagara Palike (BBMP) was asked to deposit a sum of Rs 75 crore as interim compensation for restoring the polluted Bengaluru’s Bellandur, Agara and Varthur lakes, with the CPCB. They were also asked to deposit an escrow amount of Rs 500 crore to clean the lakes.

Since 2018, the NGT has delivered around 50 orders under ‘polluter pays principle’. Of them, 21 or 42 per cent have been in the range of Rs 1 lakh to Rs 3 crore.  Among these, the maximum penalties were imposed on housing and construction projects. For example, Indira Gandhi Medical College (IGMC) Doctors Cooperative Society Limited was asked to pay Rs 3.2 crore for its failure in obtaining the mandatory environmental clearance.

Of the 50 orders, 15 or 30 per cent have had a penalty amount between Rs 5 crore and 75 crore.  Four states — Karnataka, Punjab, Rajasthan and Delhi — were asked to pay the most in this range for industrial and water pollution. 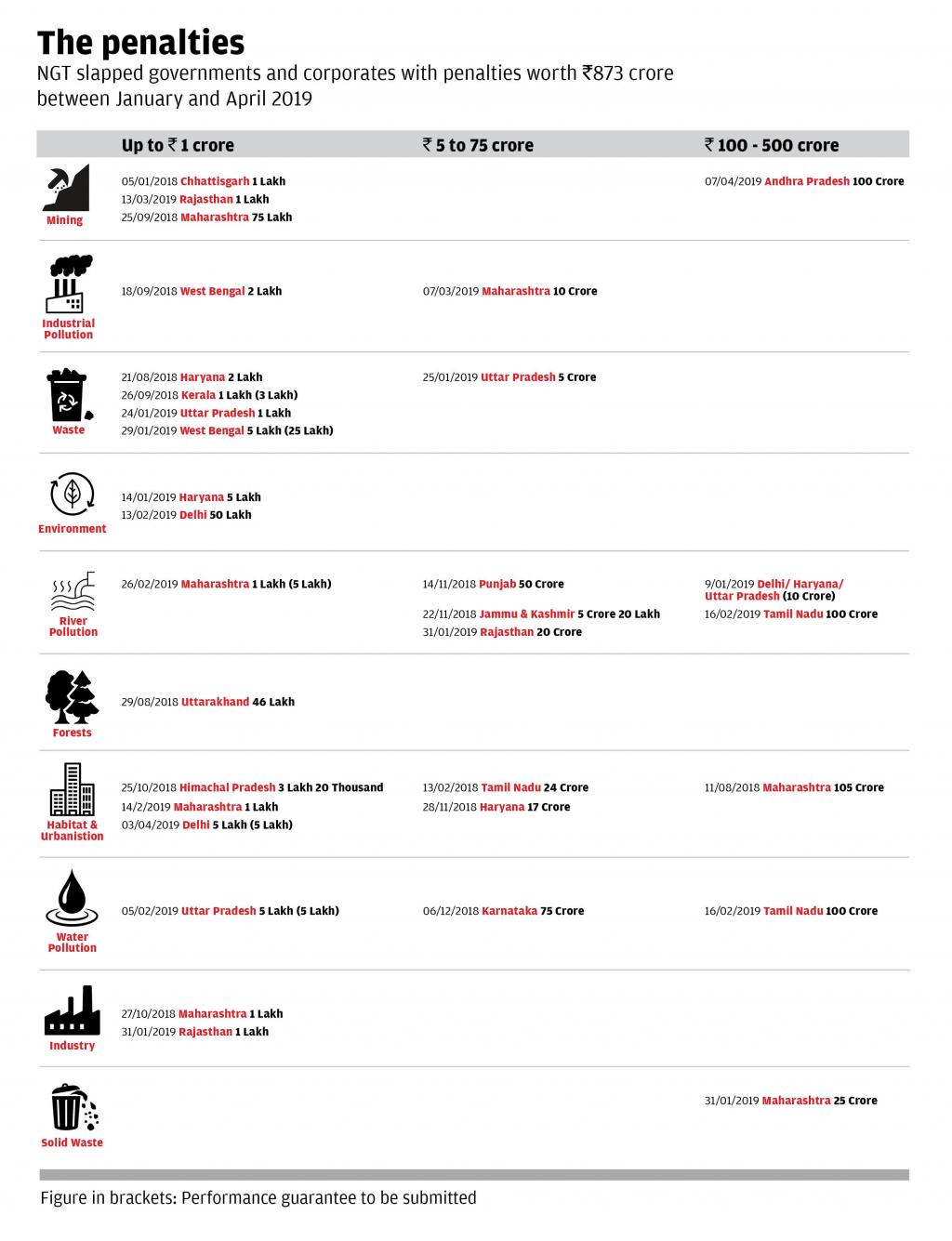 While state governments have been penalised the most, corporates have been fined a meagre amount. For example, Bharat Petroleum Corporation Ltd, the public sector oil company, was asked to pay Rs 1crore for its failure in installing anti-pollution vapour recovery system at fuel stations. Similarly, Udupi Power Corporation, a 1,200 MW coal-based power plant owned by Adani group, was asked to pay Rs 5 crore to CPCB.

Considering the profits such plants make, this fine may feel like a pinch to few plants and the bigger players may not even experience that, says a quick analysis done by the Centre for Science and Environment (CSE), a Delhi-based non-profit.

Neither corporates nor governments are in a mood to pay. After Volkswagen agreed to pay up to $14.7 billion (more than Rs 1 lakh crore) to settle emissions-cheating claims with US consumers and regulators, it shows hesitance in pay the penalty in India. The German automotive giant has now decided to challenge the most recent order of the NGT before the Supreme Court.

Similarly, the Karnataka government has challenged NGT’s order on lakes in the SC.

Penalties imposed by the NGT that are to be deposited in the Environment Relief Fund are not being paid, revealed a CSE analysis conducted last year. Lack of a centralised mechanism to monitor on-ground implementation of NGT orders is also a key challenge that needs to be addressed.