The downside of using combine harvesters 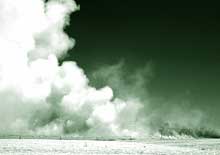 the use of combine harvesters in India for rice and wheat is generating millions of tonnes of crop residue every year. To dispose the waste, farmers usually burn it. This causes significant loss of nutrients in the soil and destroys its microbes, besides adding to greenhouse emissions, a study by scientists from Delhi-based National Physical Laboratory and the Rice-Wheat Consortium of the International Maize and Wheat Improvement Center in Mexico.

The giant harvesting machines cut close to the grain-bearing crest of the plant. The remaining part -- by far the larger -- is left as crop residue. This is why, for instance in the year 2000, as much as 17 million tonnes of residue from rice and 19 million tonnes of wheat straw were burnt in the Indo-Gangetic plain (igp), according to the study reported in the December 10 issue of Current Science (Vol 87, No 12).

In contrast, when a crop is reaped manually, the entire plant over the ground is cut. After threshing to separate the grains, the rest of the plant is used as fodder. In a country facing a 40 per cent fodder shortage, is the use of combine harvesters prudent?

A major farming practice followed in Asia is the rice-wheat system (rws) under which the two cereals are grown one after the other on the same piece of land. rws has become quite popular over the last three decades.

Rice is grown during the warm, humid season between June and October and wheat in the cold, dry months from November to March. Wheat is highly susceptible to a delay in planting. Since there is little time available between harvesting the rice and planting the wheat, farmers resort to combine harvesters. It makes better economic sense, too -- at the time of reaping and planting, there is a labour shortage because of high demand. So the labour rates tend to be high.

The number of combine harvesters has increased from 2,000 in 1986 to 5,000 in 1996, notes the study. What used to be treated as fodder, is now looked upon as waste. The simplest (cheapest) and the fastest means of disposal is burning it.

But burning of residue leads to several problems. According to a paper by B M Jenkins and A P Bhatnagar, published in Bioresource Technology in 1991 (Vol 37, No 1), one tonne of straw on burning releases 3 kilogrammes (kg) of particulate matter, 60 kg carbon monoxide, 1,460 kg carbon dioxide, 199 kg ash and 2 kg of sulphur dioxide.

The scientists estimate 5-7 tonnes of straw per ha is burnt in igp. Considering that about 75 per cent, or 15 million ha, of the rws cropped area in igp uses combine harvesting, such emissions assume humongous dimensions, they argue.

Another major concern linked to burning of agricultural residue is nutrient loss. Most cereal crops retain about 25 per cent of nitrogen (n) and phosphorus, 50 per cent of sulphur and 75 per cent potassium in crop residues.

In the uk, ammonia emissions declined from 20 Gg (giga gramme= 1,000 kg) n in 1981 to 3.3 Gg n in 1991, following a ban on burning of crop residue. Likewise, sulphur losses from burning of high- and low-sulphur rice-crop residues in Australia were 60 and 40 per cent of its content respectively.

Besides, the heat from the flames reduces bacterial and fungal populations substantially in the top 2.5 centimetres of the soil. Repeated burning in a field permanently diminishes the bacterial population by more than 50 per cent and leads to the loss of organic matter in the soil.

The study concludes with suggestions to improve the situation. Among its recommendations are: (1) devise techniques for fast decomposition of residue so that it can be incorporated in situ; (2) modify combine harvesters for separate collection and removal of straw; and (3) discourage burning of crop residue through incentives and technology transfers.