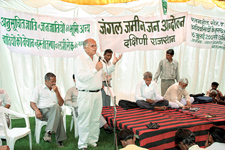 the Udaipur administration recently announced its plans to go ahead with allotment of land for jatropha plantation. The move, made under the recently notified Rajasthan Land Revenue (Allotment of waste land for bio-fuel plantation and bio-fuel based Industrial and processing unit) Rules, 2007, has sparked several protests.

Under the new rules, wasteland is to be allotted to different groups for planting its jatropha. Protestors, however, are wary of outcome.

"Land is being allotted to gram panchayats and self-help groups of below poverty line (bpl) families in villages. With the rich and powerful recorded in bpl lists, most of the groups will leave out the poor and landless," says Ramesh Nandwana, convener of Jungle Jumeen Jun Andolan, a group protesting the new rules.

The rules state that land may be allotted to non-tribal members as well.According to agitators, land in tribal areas can be allotted only to tribal groups. They say that laws like the Rajasthan Tenancy Act 1955, and Rajasthan Land Revenue Act 1956, are being violated.

The rules specify that only 30 per cent of the land in a district can be given to companies or government undertakings. But cultivators from other areas will need to sell their product to companies at prices specified by the biofuel authority. This, Nandwana says, amounts to indirectly allotting all land to companies.

On food security, Nandwana asks: "Villagers have been using the land for grazing and for agriculture purposes. They are making it cultivable. Where will they go when the land has been allotted?"

Another problem is that the committees to identify wasteland in the district comprise government officials only. ngos say that representation from civil society is restricted to the rgional member of the legislative assembly.

The state-level committees, which will look into allotments to companies, also consist entirely of government officials. Nandwana has alleged that this is a violation of the Panchayats (Extension to Scheduled Areas) Act, 1996, which empowers gram sabhas in Schedule v areas to take decisions with regard to village land.