A dharna here, a court victory there: How Rajasthan villages try to keep their land from solar firms

Encroachment of pastureland was possible because government doesn't recognise them as village commons, say locals 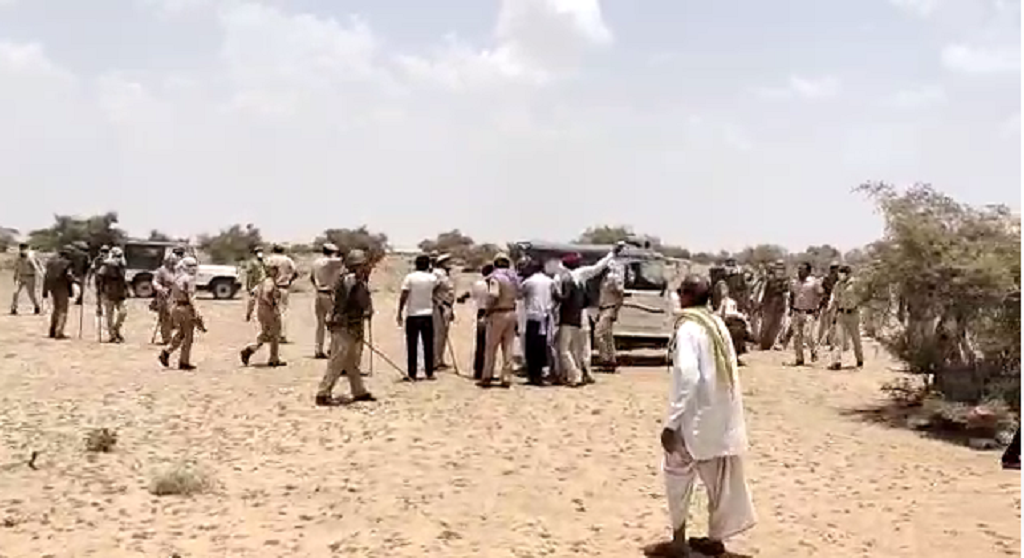 Some Indian states saw a string of protests over the last couple of months against renewable energy projects on village land, even as the novel coronavirus disease (COVID-19) pandemic was raging in the country.

On July 6, 2021, police officials lathi charged locals participating in a dharna against plans to lay electricity lines across pasturelands in Gajner, a village in Bikaner district, western Rajasthan.

The land has been owned by the community for years, said locals. Geeta Kumar, the sarpanch of Gajner, has been protesting against this project alongside locals for over 200 days because of non-recognition of the land as village commons.

She sustained injuries in the police action.

“When we went to protest against the laying of electricity lines on pastureland, they hit us,” said Jetha Ram, ex-sarpanch, Gajner.

The work is being carried out by Mahindra Susten, a renewable energy company that runs a solar power plant in Gajner and other locations.

“Mahindra has already laid power lines across the area and now, want to lay these lines through the pastureland, which is considered a common property resource,” said Sumit Dookia, a wildlife biologist at Guru Gobind Singh Indraprastha University in New Delhi and scientific adviser to the Ecology, Rural Development & Sustainability Foundation.

Locals are demanding that before allowing companies to lay power lines, community land rights should be settled, he added.

The dharna at Gajner marks only the latest in a series of local struggles against takeover of common property resources by renewable power companies.

Mahindra Susten did not respond to questions regarding land rights of locals and the lathi charge.

Vehement opposition to land aquisiton for solar projects is not new in the state.

In 2018, Adani Renewable Energy Park Rajasthan Ltd (AREPRL) was allotted 6,115 bighas (about 3790 acres) for solar projects in a village called Nedan near Pokhran.

Locals, specifically those practising agriculture on the land, filed a petition in the Rajasthan High Court, declaring that they have been cultivating the land for the last 40-45 years.

In the petition, they claimed that the land in question was allotted to AREPRL by ignoring the community’s land rights and without issuing any notices about the allotment of the land to power companies.

On June 29, the Rajasthan High Court ordered the cancellation of 1,452 bighas (around 900 acres) of land allotted to Adani Renewable Energy Park Rajasthan Ltd (AREPRL) in a village called Nedan near Pokhran, western Rajasthan. Overall, AREPRL was allotted 6,115 bighas in 2018.

The land provides livelihood to the villagers via farming and also hosts a water tank, a school, a temple and an oran (sacred land).

The land is in the name of the government because the process of recognising the rights of the people is still ongoing, said Sikander Sheikh, a local journalist. He added:

We are in a position where the state government is not recognising our land rights but is allotting land to these power companies. This allotment is easy because farming is not recognised as authorised by the government.

People in Nedan are dependent on the land for both agriculture and grazing purposes, he shared. “Where should people go and what should they do if this land is given away to companies?”

The land, located around 70 kilometres from the Desert National Park, was recognised by the Wildlife Institute of India as a ‘potential area’ for the conservation of great Indian bustards, a critically endangered species — India only has a population of around 150.

The birds have made the case for recognition of community rights over the land stronger, according to Dookia.

Banti Rajput, revenue officer of Pokhran block, did not respond to questions about how the land was allotted to AREPRL before recognising rights of local communities.

This reporter also sent AREPRL a request for an interview. This copy will be updated if and when a response is received.

The government cannot transfer these lands for any development activity without the consent of the locals, Dhookia said. “The land belongs to each and every person of (the respective) villages.”

Resistance in Gujarat too

And it’s not just solar power. On August 6, 2021, villagers in Kutch went on a protest to stop Suzlon from installing windmills in their forests and grazing lands.

Shankarbhai Limbani, a resident of Sangnara, a village in Kachchh, said:

Installation of windmills has stopped after the protest. But you never know. These lands are sacred to us. We also use them for grazing our cattle. If all the trees and plants are removed, where should we go?

The area is also home to threatened wildlife species like the caracal, spiny-tailed lizard and hyena.

A request for comments from Suzlon went unanswered.