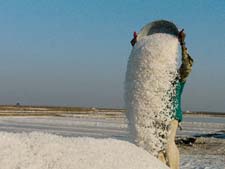 thousands of saltpan workers, called Agarias, from 107 villages in Gujarat's Rajkot, Surendranagar, Patan and Kutch districts face displacement with the Gujarat forest department serving them an eviction notice in December 2006. The workers were asked to leave the area, which falls under a wild ass sanctuary and told that they would face three years of imprisonment and fine of Rs 25,000 if they failed to evict the place.

We were not informed, says Narubhai Goganbhai, a saltpan worker in Patan. "The manner in which the eviction notices were issued to Agarias is questionable," says Chandubhai Kudecha, a worker from Surendranagar. "About three months back, some forest department officials came to our village and asked us to sign some papers. We were told that a new scheme was announced by the state government for which our signatures were needed," Kudecha adds.

The Agarias approached the additional collector for survey and settlement in Surendranagar. But officials did not accept their petition saying the stipulated period of 60 days was over. Despite this, around 6,500 saltpan workers applied for resettlement and rehabilitation this year.

A B Parmar, additional collector (survey and settlement wild ass sanctuary) says he will submit a final report to the government on the rehabilitation of the workers. "More than 70 per cent agarias need not be displaced," he says.