Researchers of the University of Michigan, usa, have cracked the genetic secrets of nicotine addiction. Whether or not one gets hooked to smoking is dependent on a particular variant of a gene-- chrna 5--they say. So far, it was believed that smoking is governed by one's genes, environmental factors and peer pressure. The research suggests that the gene could be at work from the very first instance of exposure to nicotine. The finding may help in the development of anti-smoking drugs and make it easier for people to wean themselves off cigarettes, or even stop them from taking up the habit. Genetic data was obtained from 435 volunteers, some of whom were regular smokers, and some who had tried cigarettes but were not currently smokers.They were quizzed about how they felt about their first smoking experience. Regular smokers were far more likely to have the variant version of the gene and more likely to report that their first smoking experience was pleasurable. 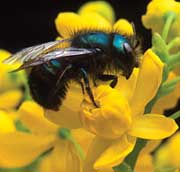 The Global Environment Facility, a partnership among 178 countries to address global environmental issues, has launched a project worth us $26.45 million to better protect pollinators--beets, bats, birds--that are essential to the world's crop production. The main threats to pollinators are from disease, pesticide use, habitat loss and degradation, monocultures and introduction of exotic species. The United Nations Environment Programme will implement the five-year project, Conservation and Management of Pollinators for Sustainable Agriculture through an Ecosystem Approach. Pollinators such as birds, bees, butterflies, bats and even mosquitoes are essential for food production becausetheytransferpollenbetweenseed plants-impacting 35 per cent of the world'scrops.

Platelets play an important early role in promoting cerebral malaria, say researchers of Johns Hopkins University. When red blood cells are infected with the malaria parasite, they activate platelets to secrete pf 4 protein, which triggers the immune system to inflame blood vessels and obstruct capillaries in the brain; both distinct features of cerebral malaria. This should help in treating the ailment better. Researchers first infected human red blood cells in culture with the malaria parasite and found that it induced platelet activation. They then infected separate sets of live mice with the malaria parasite one set lacked platelets and two others with platelet inhibitors that prevent the release of pf 4. The survival rate of mice without platelets as well as those treated with inhibitors was improved over that of the mice left alone, but only when the treatment began very soon after infection.

Researchers of Purdue and Pennsylvania universities in the us have discovered an unusual molecule that break down pollutants, especially compounds that cause acid rain. The Earth's atmosphere has the ability to "burn" or oxidize pollutants, especially nitric oxides emitted from sources such as factories and automobiles. "The chemical details of how the atmosphere removes nitric acid have not been clear till now," a researcher said. This discovery will allow scientists to better model how pollutants react in the atmosphere and to predict potential outcomes. The molecule has two hydrogen bonds, which allows it to form a six-sided ring structure. Hydrogen bonds are usually weaker than the normal bonds between atoms in a molecule, which are known as covalent bonds. Covalent bonds are 20 times stronger than hydrogen bonds. But in this case, these two hydrogen bonds are strong enough to affect atmospheric chemistry. 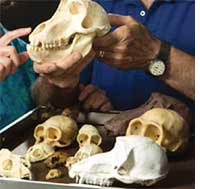 Fossilized teeth, just nine-thousandths of a square inch in size, were discovered from an Indian open-pit coalmine by researchers of Duke University, usa and iits in India. This could be the oldest Asian remains ever found of anthropoids, the primate lineage of today's monkeys, apes and humans. The teeth are about 54. 5 million years old and suggest that these early primates were no larger than modern dwarf lemurs weighing about 0.08 kg. Until now, fossil record of anthropoid primates has extended back only 45 million years. The specimens found also represent a new genus and species of anthropoid, which the researchers call Anthrasimias Gujaratensis by drawing from the Greek word for coal, Latin for monkey and Gujarat where the teeth were found.

Ginger has been extensively cultivated for use as a spice and traditional medicine. A study has confirmed that the pathogen Aspergilus niger causes necrotic leaf spot disease. This is the first report ever of the pathogen afflicting ginger. During a survey in Maharashtra in September last year, it was found that ginger leaves suffered from the disease. Symptoms appeared as small, rectangular to irregular, yellow spots on the leaves that covered a major area of the leaf when severe. The infection caused defoliation.