Locusts fly for days across deserts and oceans on wings that are 10 times thinner than a human hair. Yet the wings do not break. Why? It all depends on the precise spacing between the veins in insect wings. This spacing allows the crack to heal before it spreads. The veins act as barriers and increase the toughness of the wings by 50 per cent. Researchers believe that the vein pattern found in insect wings might inspire the design of more durable and lightweight artificial venous wings for micro-air-vehicles. PLoS ONE, August 22 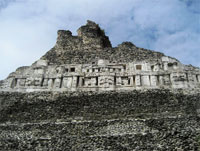 The Mayans flourished across what is now southern Mexico and north central America for six centuries. But in 695 AD, several of their cities collapsed, marking the beginning of a slow decline. It was thought that a prolonged drought caused this. But a study has suggested that the Mayans brought the drought upon themselves by clearing away rainforests to make space for crops. As the tree cover was removed, the soil did not retain water and evaporation from the ground reduced, thereby releasing less moisture into the air to form rain-making clouds. Mayans caused 60 per cent of the land to dry out this way. This comes as a warning against rapid deforestation happening across the globe. Geophysical Research Letters, August 25 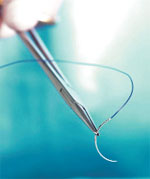 A stitch in time saves nine. But a new temperature-sensitive, smart suture does much more than that. Normally, a stitched up wound lies under layers of bandage and any infection goes unnoticed till it becomes severe. But this new type of suture detects an infection by monitoring the temperature of the wound site—elevated temperatures indicate infection—and delivers heat to the wound to aid healing. The electronic surgical suture consists of ultrathin silicon sensors and gold electrodes embedded in polymer or silk strips. Small, August 14 (online)

TNT or trinitrotoluene is the explosive of choice for various terrorist groups since it changes from solid state to hot expanding gases very quickly. Methods available for its detection are expensive, time-consuming and require large, bulky instruments, laborious sample preparation and expert handling. Indian researchers have now developed a sensor that can detect as few as nine molecules of TNT. The sensor consists of flower-shaped gold nanoparticles that support silver nanoparticles embedded in a protein. If the sample being tested is clean, the sensor gives off a red glow on being irradiated with light of a particular wavelength under a fluorescence microscope. But if the sample contains TNT, the signal changes to green. Angewandte Chemie, August 22 (online)

Nanoparticles are found in everything from cosmetics to diesel fuel. The particles, millionth of a millimetre in size, constantly seep into the environment from these consumer goods. A study has found that these particles threaten crop growth by entering the soil. They stunt the growth of bacteria that naturally fertilise the soil and hit the development of crops like soybean. Scientists grew soybeans in soil mixed with nanoparticles of zinc oxide and cerium oxide and found that the particles affected crop yield and quality. PNAS, August 20

Superbugs, or bacteria resistant to drugs are on the rise. A study has found that vitamin B3 can combat infections by some of these drug-resistant bacteria that kill thousands every year. High doses of the vitamin, found in poultry, fish and yeast, stimulated a specific gene that enhanced the ability of the white blood cells to combat Staphylococcus bacterial infection by 1,000 times. The work may offer a new avenue of attack against the superbugs. Journal of Clinical Investigation, August 27

Peanut butter, chocolate and ice cream are a gastronome’s delight. But scientists have found an unlikely application for these sweet treats—cleaning oil spills. They showed that lecithin, an ingredient in these products and cellulose, which gives ice creams a thicker texture, can be used to create oil dispersant. The product is safer and more effective than petroleum-based dispersants that contain toxic chemicals. It is based on the principles employed in laundry detergents to keep grease from redepositing on clothes. One ingredient, for instance, is a polymer that sticks to the surface of oil drops to keep them from sticking to the feathers of sea birds. Presented at an American Chemical Society meeting, August 20 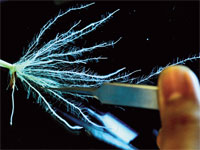 Like other plants, rice needs phosphorus to grow. But most of this mineral is often locked in the soil and unavailable to plants. Farmers are thus compelled to use rock phosphate as a fertiliser, which is a non-renewable source and could be exhausted in 50 to 100 years. Scientists have now identified a gene, PSTOL1, which stands for Phosphorus Starvation Tolerance, that helps rice grow a larger, better root system and thereby access more phosphorus. The gene comes from a rice variety, Kasalath, native to eastern India. When this gene was transferred to rice plants in phosphorus-poor soils, yield increased by 60 per cent. Nature, August 23 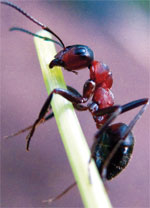 Ants and computers do not seem to have much in common. But researchers have found that harvester ants transmit information in a fashion very similar to the way data moves on the Internet. They dubbed the phenomenon anternet. If food is plentiful, these ants return to the nest faster, and more ants leave to forage. If ants begin returning empty handed, the search is slowed. This is also how Internet protocols work. The data to be sent is segregated into numbered packets. Upon receiving a data packet, the destination sends out an acknowledgement to the source. If this acknowledgement comes back slowly, the source decreases the delivery speed, and vice versa. PLoS Computational Biology, August 23

Environmental Sciences
Not so full of life 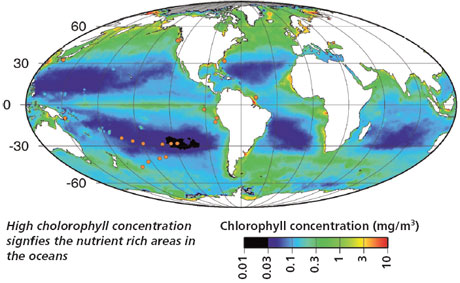 Earth might support one-third less life than has been estimated till date. Past assessments suggested that living organisms store about one thousand billion tonnes of carbon, of which 300 billion tonnes is in single-celled organisms on the ocean floor. However, a study has now found that there is just four billion tonnes of carbon stored in sub-seafloor organisms. Previous estimates of the amount of life on the ocean floor were skewed as they were based on samples taken in nutrient-rich areas, such as close to shore. Those estimates neglected “nutrient deserts”, the highly nutrient deficient areas, that form half of the world’s seas and do not support much life. The new findings provide a better picture of the distribution of living biomass on Earth. PNAS, August 27