The team was able to identify over 2,000 individual stars in images taken through various ultraviolet filters 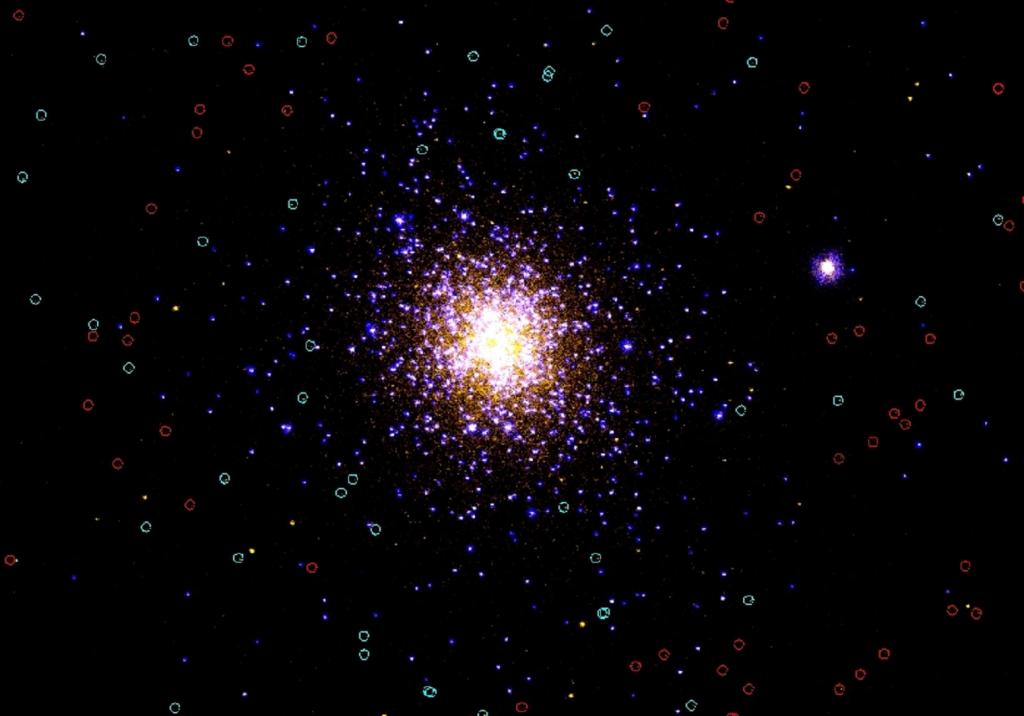 The Indian multi-wavelength space observatory AstroSat, launched in September 2015, continues to yield exciting results. Using this observatory, astronomers from Thiruvananthapuram and Mumbai have identified a new population of ultraviolet stars in the globular cluster NGC 2808.

Globular clusters are collections of thousands to millions of stars, moving as one unit. These stars are tightly held together by gravity of the cluster itself, and are believed to have formed together at roughly the same time. Some globular clusters could be among the oldest objects in our Milky Way, which hosts over 150 of them.

Stars are born, evolve, and then die. However, the timescales for this evolution are unimaginably large. “Massive stars evolve faster, over few million years and die in a spectacular fashion. However, stars like our Sun or even less massive ones, evolve slowly over billions of years,” explained Rashi Jain, an MSc student at Indian Institute of Space Science and Technology (IIST), Thiruvananthapuram, and a member of the research team.

Since a globular cluster contains stars with a variety of masses but with similar chemical composition, a snapshot of it could reveal stars of different masses at different stages of their evolution. The Sun will, after 5 billion years, expand to become a red giant star and go through some of these stages.

Stars which are more massive than the Sun will undergo different evolutionary paths, and will be much brighter in the ultraviolet range since they are hotter. Hence globular clusters are good laboratories to test theories of stellar evolution.

NGC 2808 is one of the most massive globular clusters that we know of, and is located at a distance of 47,000 light years from us. This cluster was observed by the team of researchers using the UltraViolet Imaging Telescope (UVIT) on-board AstroSat.

“We wanted to get a UV perspective of different populations of stars in globular clusters and UVIT provided us that opportunity,” said Prof Sarita Vig from IIST who led the research effort.

The team was able to identify over 2,000 individual stars in images taken through various ultraviolet filters.  “Using their brightness in each of the filters, we could estimate the temperature of these hot stars that are ultraviolet-bright, which in turn allowed us to segregate them into distinct groups of stars,” added Swarna Ghosh from the Tata Institute of Fundamental Research, a co-author on the paper.

Contrary to normal assumption that all stars in such clusters are of the same age, recent studies have shown that many globular clusters may well host more than one population of stars. These seem to differ from each other in their chemical makeup.

The origin of this difference is still not well understood, though there is a prevalent theory that explains much of this data. NGC2808 is special since optical observations tell us that it may have at least five different populations of stars.

Using the combination of ultraviolet filters on UVIT, researchers attempted to segregate various groups of hot stars and were able to identify stars in each evolutionary stage, as expected.

However, they also found, for the first time, that a class of evolved stars called, Red Horizontal Branch, actually consists of two distinct groups. Since locations of the stars on the sky are known, they could carefully look at how these different classes of stars were located within the cluster.

Their analysis points to a disagreement with the widely accepted model of how a cluster acquires multiple populations of stars.

Taking advantage of the superior resolution of UVIT combined with its multiple filters, similar studies of individual stars of other globular clusters can lead astronomers to understand how these stellar populations formed in such clusters. The results of the study will be published in the Monthly Notices of the Royal Astronomical Society. (India Science Wire)