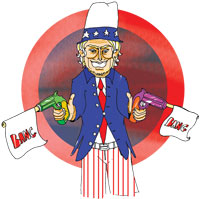 American defence strategists have plans to categorise cyber attacks as acts of war, the Pentagon says.

“A response to a cyber-incident or attack on the US would not necessarily be a cyber-response. All appropriate options would be on the table,” Pentagon spokesperson Dave Lapan told BBC. A US president could consider economic sanctions, cyber-retaliation or a military strike if key US computer systems were attacked, he added. But the plan does not mention how the US may respond to cyber-attackers who are not acting for a nation state.

The Wall Street Journal quoted a military official as saying, “If you shut down our power grid, maybe we will put a missile down one of your smokestacks.” But White House officials told New York Times they would consider a military response to a cyber attack as a “last resort”.