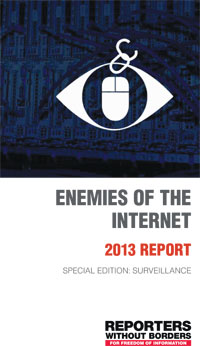 Three of the world's leading democracies are among the fiercest enemies of the Internet—so says a report by Reporters Without Borders. India, US and the UK found place with usual culprits China, North Korea, Saudi Arabia and Iran in the annual report of the international non-profit, Enemies of the Internet.

The organisation that campaigns for a free press and an uncensored Internet points to the US National Security Agency revelations leaked by Edward Snowden as evidence and states that “the country of the First Amendment (to the Constitution that ensures freedom of press) has undermined confidence in the Internet and its own standards of security”. The report goes on to say that “US surveillance practices and decryption activities are a direct threat to investigative journalists, especially those who work with sensitive sources for whom confidentiality is paramount and who are already under pressure.”

The report criticises the surveillance practices of the UK and India; the “electronic great wall” put in place by China; and the “digital tyranny” of the authorities in Uzbekistan.