How is COVID-19 diagnosed and are the tests reliable?

The RT-PCR test involves sticking a swab, similar to an earbud, but uses nylon instead of cotton, deep into the nose or throat Photo: Vikas Choudhary

The first one is based on a routine lab technique, reverse transcription polymerase chain reaction (RT-PCR), which amplifies the minuscule amount genetic material in a pathogen and helps identify it.

The technique has to be customised as per the disease by using priMERS, or short nucleic acid sequences, specific to the pathogen’s genetic material.

Typically, the procedure involves sticking a swab, similar to an earbud, but uses nylon instead of cotton, deep into the nose or throat, retrieving mucous sample, placing the swab in buffer solution to transport and isolate the virus, replicating its genetic material using chemicals or reagents like priMERS, enzymes and nucleotides and then detecting it with fluorescent probes. Once the sample reaches lab, the entire process takes six hours.

The serological test kit, on the other hand, is simpler and portable, just like a pregnancy test kit and can give results in 20-30 minutes. It is also cheaper: In India, a rapid antibody test costs about Rs 400 compared to RT-PCR that costs Rs 4,500.

Based on a drop of blood, these test strips look for antibodies that are produced as a natural defence mechanism of the body when exposed to a pathogen. Thus, it not only helps find out those who were infected and subsequently recovered, it also helps identify asymptomatic patients who could have silently spread the infection.

But the effectiveness of any medical test depends on accurate diagnosis. This is assessed in two ways: Specificity and sensitivity.

If someone tests false positive, then he or she would have to go through needless treatment and duress. Both the tests are mired in these specificity and sensitivity issues.

This limitation is now getting more pronounced because of the haste with which the testing tools and kits are being developed and approved. Besides, never before has the world seen such a huge demand for tests. This has overwhelmed developers as well as suppliers, triggering shortages everywhere. 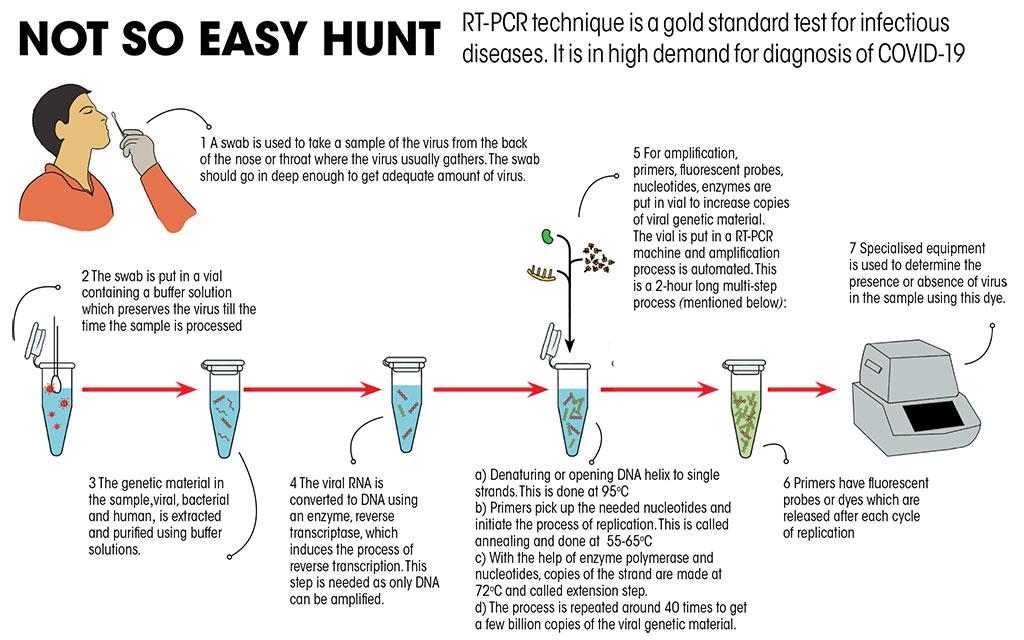 When the World Health Organization (WHO) asked countries to “test, test, test”, it talked only about RT-PCR. This test, considered the gold standard for diagnosing the COVID-19, depends on a robust supply chain for each and every ingredient.

Between February and April, as active cases kept mounting, the world faced a shortage of COVID-19 RT-PCR testing kit components, right from swabs and buffers to enzymes. In the US, Colorado received seven per cent of the swabs it requested from the federal government till April 24.

California received 90,000 of the 350,000 swabs it had asked for. To maximise the available swabs, the Centers for Disease Control and Prevention (CDC) revised its guidelines on March 9 and asked technicians to collect one specimen swab instead of two.

A major problem with RT-PCR tests is that it depends on proprietary ingredients, protected by a registered trade name. These cannot be quickly developed by other manufacturers to meet the shortfall.

Although other versions of the ingredients might work, it’s not easy to simply switch to a different type as even tiny changes can make the test fail. False results can be disastrous in this fight against COVID-19.

In March-end, the Netherlands faced shortage in reagents. It asked F Hoffmann-La Roche Ltd, which supplies to most Dutch labs, to share the recipe for its buffer solution. Under pressure from the European Commission, Roche agreed but shared a generic recipe available in text books. That month, the US also saw short supply of extraction reagent developed by Dutch company Qiagen GmbH.

“We will never have enough testing as reliance is on proprietary reagents. There needs to be more sources of PCR reagent, including from domestic producers,” said Leena Menghaney, lawyer with humanitarian group Médecins Sans Frontières.

To overcome the shortage, researchers have come up with alternatives. One US-based Formlabs is working on 3D printing with pliable resin, which can replace the nylon swabs. Others are working on testing methodologies that simply would not require swabs.

To reduce dependence on buffer solution, dry swabs are also being developed. Some have found that a saline solution or standard buffer solution work equally well as the specialised ones.

But these need to be validated by regulatory agencies before they are put to use. Any glitch can further reduce the reliability of RT-PCR, already fraught with accuracy issues. An analysis of the available RT-PCR kits for COVID-19 shows some have sensitivity of just 90 per cent and specificity of 96 per cent.

In real world conditions, this could be just 66 to 80 per cent, which means one in every three would be falsely tested as negative.

It is portable, faster and cost-effective. But it isn’t a diagnostic tool and can, at best, be used for research. The reason for this is simple. Our body develops antibodies only after a week or 10 days of being infected by a pathogen.

Their specificity was good, between 85 and 100 per cent, but sensitivity was low, between 55 and 85 per cent. Due to low sensitivity, a positive result would indicate that the person was infected and had antibodies against the virus. But in case of a negative result, it is difficult to rule out if the person is infected. Thus, researchers said these tests are good for population-level surveys, but inadequate for patient applications.

The unreliability of antibody tests has been long known. In the case of influenza, its sensitivity is as low as 70 to 75 per cent and thus false negative results are a major concern.

Tests for dengue have variable performance, depending on the developer, serotype, medical history and duration of sickness. Even pregnancy kits that have been in use since 1976 and are generally considered reliable, have not been validated for reliability.