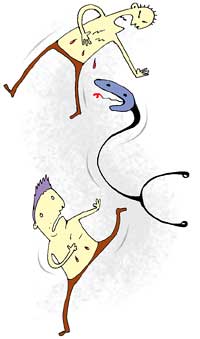 Chinese Internet search engine Baidu has said it will overhaul its operations after being shamed by the government for allowing unlicensed medical services to buy high search rankings. In the last week of November, the state-run China Central Television reported that the search rankings had steered people to unlicensed and expensive hospitals or medicines that failed to cure them.

One patient told the channel that he had wasted more than 10,000 yuan (us $1, 450) at a clinic he chose because it topped the Baidu results. The unlicensed clinic paid Baidu nearly 17 yuan per click (about us $2,50) for a prominent ranking, according to the report. This enabled them to profit from clicks for expensive but useless treatments.

Robin Li, Baidu's chief executive officer, told the state news agency Xinhua on Friday that the firm had sacked staff over the case and could fire more. "We have already fired people who fabricated documents for unlicensed suppliers," he said. Li also said that Baidu had removed key words of all four clients mentioned in the Central Television report and has begun to double-check the licences of all other hospitals and pharmacies on the company's client list.