Solar energy is free, but harnessing it using conventional crystalline silicon cells is expensive. Efforts in India to produce an efficient, low-cost alternative using amorphous, or non-crystalline, silicon are now close to success 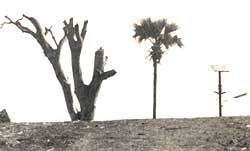 SOLAR cells used to tap energy from the sun are made up of photovoltaic substances such as silicon which, when combined with suitable additives and exposed to sunlight, produce electricity. Extracting crystalline silicon from the compounds in which it is found is highly energy-intensive and the element itself accounts for upto 50 per cent of the total cost of producing photovoltaic systems. Crystalline silicon for photovoltaic applications costs about Rs 1500 (US $50) per kg in the global market. A little over 25 gms of monocrystalline wafers is required to produce one watt of electricity.

The Department of Non-conventional Energy Sources (DNES) has been exploring the use of amorphous silicon technology to reduce the cost of photovoltaic solar cells. Bharat Heavy Electricals Limited (BHEL), Bangalore division, was assigned the task of establishing a plant to produce amorphous silicon solar cells and set up one at Gurgaon, Haryana, which was commissioned in July 1992. The Rs 16-crore plant produces amorphous silicon solar cells equivalent to 500 kwp (kilowatt peak output of electricity) per shift and has an annual capacity to produce 300 kg of Silane gas, an essential raw material. During pre-commissioning runs, the plant produced over 2000 modules of solar cells with different process parameters. Efficiencies of converting solar energy into electricity exceeding 7 per cent were achieved on individual cells in the modules.

According to R K D Shah, Executive Director (corporate planning and development), BHEL, "At present the production of amorphous silicon photovoltaic cells is still in an experimental stage. Though the potential applications are many, amorphous silicon cells are still being tested and tried in various systems and applications."

Research in India has focused on increasing the efficiency of amorphous silicon, which is also unstable and loses efficiency at high temperatures.

Efficiency levels of over 12 per cent have been achieved by the Bangalore unit of BHEL. It has produced solar cells of 10 cm diameter which have achieved upto 14.3 per cent efficiency -- the highest achieved in the country so far. The conversion efficiency of photovoltaic devices in the international market is around 17.5 per cent.

Work on photovoltaic solar cells began in India as early as October 1980, when the Central Electronics Limited, Sahibabad, was established to produce monocrystalline silicon cells.

A separate technology mission was, therefore, set up for the development of amorphous silicon technology in the seventh plan. Prime Minister P V Narasimha Rao, who has taken particular interest in solar energy development, asserted in Parliament, "We are at the point of achieving a breakthrough in commercial applications of photovoltaic technology."

S Mehrotra, an official at BHEL, says, "When we started working on the amorphous silicon technology, we were perhaps 15 to 20 years behind the developed countries. But now we have definitely closed the gap."