A giant detector at the South Pole has discovered that a “blazar”, a galaxy with a supermassive black hole at its centre, also produces neutrinos 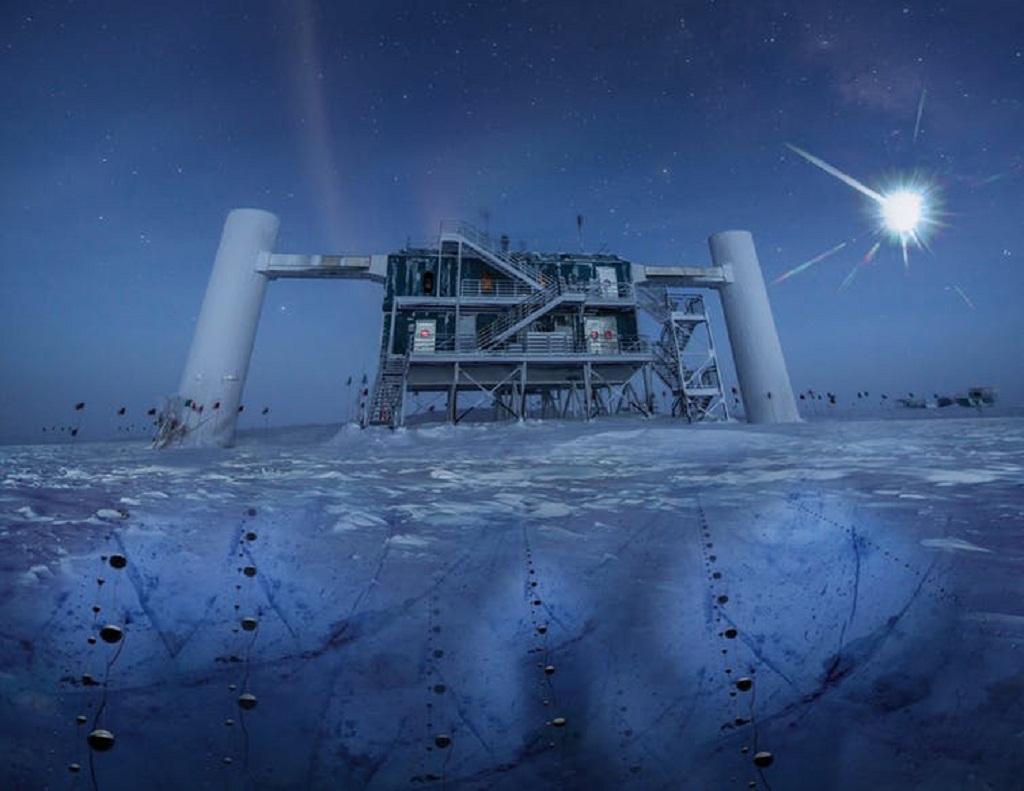 Artist’s impression based on real picture of Icecube lab. IceCube/NSF

Neutrinos – extremely light, ghostly particles that barely interact with matter – have so far only been observed originating from supernovae (exploding stars) and the sun. Now a giant detector at the South Pole has discovered that a “blazar”, a galaxy with a supermassive black hole at its centre, also produces neutrinos.

This is the first time a source of neutrinos in space has been discovered in more than 30 years. What’s more, it’s the first time scientists have observed a neutrino particle with high energy associated with an astrophysical event. This is really exciting news. The observation, just published in Science, opens a completely new chapter in neutrino astronomy.

Neutrinos are fundamental matter particles. The ordinary matter that we are all familiar with is made out of electrons and quarks. We do not observe neutrinos in daily life as they are extremely hard to detect. Theoretical physicist Wolfgang Pauli suggested their existence in 1930, but it took until 1956 before they were first seen by experimental physicists coming from a nuclear reactor.

The reason that they are so hard to detect is because they only weakly interact with ordinary matter. Most neutrinos fly straight through the Earth: they do not interact at all. They do, however, play a very important role in the universe.

For example, when a heavy star explodes at the end of its life, it is known as a supernova – as it shows up as an extremely bright and seemingly new star in the sky. We now know that supernovae emit many more neutrinos than photons (light particles), which we cannot see by eye. Scientists detected the first neutrinos from a supernova in 1987 when a star collapsed just outside our Milky Way. This unique observation has given us a better understanding of supernovae, as well as the properties of neutrinos themselves.

This event marked the birth of what we call neutrino astronomy. Powerful neutrino telescopes were built soon after. One of them was the Sudbury Neutrino Observatory (SNO). Physicist Art McDonald received the Nobel Prize for Physics in 2015 for the detailed studies of solar neutrinos that he and his team did using this observatory, and the insights this gave us into the properties of the neutrino particles.

Another telescope has now grown to be the largest of them all. The IceCube experiment at the South Pole is a cubic kilometre in size and uses deep arctic ice as a target for the neutrinos. Although neutrinos typically don’t interact with anything, they can produce a charged particle when they occasionally do interact with the fundamental particles that make up ice. In IceCube, this resulting particle travels through the ice and produces a trail of faint light.

This trail is captured by a large array of sensitive photodetectors that are mounted up to three kilometres deep into the ice. With this information, IceCube can detect high energy neutrinos, measure their energy and determine where they came from. Other cosmic particles only travel a few kilometres through the Earth, at most. So, if the particle is seen to come up from below, it must have been produced by a neutrino interaction, as it is the only particle that can travel such a large distance through the planet.

The neutrino that was observed by IceCube in September 2017 is very special. This neutrino must have had an extremely high energy – IceCube scientists estimate between 183 and 290 trillion electron volts (a unit of energy). That is 28-45 times more energy than the particles in the beam of the Large Hadron Collider at CERN, the world’s most powerful particle accelerator.

However, neutrinos with even higher energies have been observed by IceCube before. The exciting thing about the new discovery is that it has been shown to come from a blazar, which has been observed by other experiments, such as the FermiLAT satellite and the MAGIC telescope. In a blazar, it is thought that the supermassive black hole at the centre absorbs matter to produce two extremely powerful jets of radiation. These jets could act as powerful particle accelerators.

Blazars were long suspected as a possible source of very high energy neutrinos in the universe, but we now have firm evidence. Together with IceCube, observations of this blazar have been made using telescopes that are sensitive to different types of electromagnetic radiation: radio, optical, gamma ray, and X-ray.

With this observation, IceCube has made a significant step forward in neutrino astronomy. Its neutrino adds new information to the observation of the blazar, helping us to understand these fascinating objects better. It can tell us about the mechanism of particle acceleration in blazars and more about how blazars produce such tremendous amounts of energy. We may even learn something new about the universe, or neutrinos, that we didn’t expect.