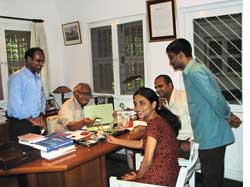 it takes a research team from Bengaluru 10 days to prepare a batch of the compound it hopes would revolutionize the world. The compound consists of polyvinyl alcohol, a polymer, mixed with two carbon nanomaterials. There is a tremendous increase in the stiffness and hardness of the polymer--the very stuff without which the sports industry would be in danger of closing down. The examples, in fact, are endless; so are the uses of polymers.

The team from the Jawaharlal Nehru Centre for Advanced Scientific Research treats the two nanomaterials--carbon nanotubes and nanodiamond particles--with a mixture of nitric and sulphuric acid. This makes them easily mix with the polymer (polyvinyl alcohol). 0.2 mg of each nanomaterial is then added to 100 mg of the polymer. The mixture is poured into a petri dish and left to dry for three days at 30C. Care is taken to see no air bubbles enter the petri dish.

Korimilli Eswar Prasad, one of the key researchers, tests the modified polymer: it has high mechanical strength. For the first time two nanomaterials are being used instead of one. They seem to work together to achieve what a single nanomaterial could not: 400 times greater efficiency.

Upadrasta Ramamurty, material scientist at the Indian Institute of Science, Bengaluru, and part of the study gives a possible reason: The polymer which forms the matrix consists of long molecular chains of polyvinyl alcohol. While the carbon nanotubes can strengthen the chains along its length, the nanodiamond particles might be strengthening different points of the chain at the same time.

"The new polymers may find good use in the transport sector and the sports industry. There also are other possibilities and much work needs to be done still," said C N R Rao, who led the study published in the July 27 issue of Proceedings of the National Academy of Sciences .