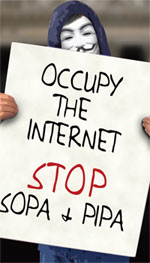 France has revoked an anti-piracy policy that threatened individual offenders with Internet bans. The French government now plans to target sites that make money from offering illegally copied content. A 2009 law gave regional courts power to suspend copyright infringers’ connectivity for up to a month if they were caught three times.

It was supported by the entertainment industry, but France’s current culture minister Aurélie Filippetti said the penalty was “ineffective”.

Under the previous scheme, a state agency, known as Hadopi, sought out individuals guilty of illegally copying content and sent them warning emails and letters. If the first two messages were ignored, the agency could summon the suspected offender to an interview, and if it still was not satisfied it referred them to a judge.

However, to date the judges have only ordered one person’s net access to be suspended—a 43-year-old accused of copying music by Rihanna, pop group Collectif Metisse and French movie Heartbreaker.