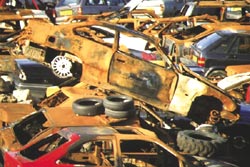 Ten European Union (eu) states have shown little urgency in adopting a law on recycling cars. Taking serious note of this, the European Commission has issued formal warnings to them. The countries are France, Belgium, Luxembourg, Italy, Britain, Ireland, Greece, Spain, Portugal and Finland. The eu's end-of-life vehicles law should have been in their rulebooks by April this year. Under the landmark law, carmakers are required to cover the cost of tough new rules on removing toxic parts from old vehicles and recycling most of the waste. Countries must finalise the national legislation needed to make these new rules effective.

While issuing the warnings, the commission has asked defaulter states to explain the reasons for the delay. And if the eu executive is not satisfied with the reply, it can decide to take the countries to the European Court of Justice. Such a step could, in turn, lead to fines for each day the law is not adopted.