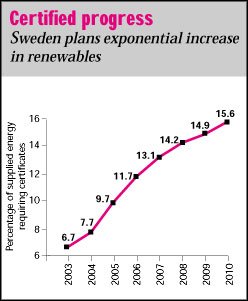 all the three partners in the coalition government of Sweden ratified a new energy policy allowing trading certificates in renewable energy.

Under the new system guaranteed investment subsidies for particular forms of energy will be eliminated and replaced by market-based 'green' certificates. The targets for renewable energy have also been raised three times to 10 billion kilo watt hours (kWh). It will require the annual growth rate of renewable energy to increase four times over the next decade.

The proposed certification system is conceived as follows: producers of geothermal, wind, wave energy and small-scale hydropower (up to 1,500 kW) can earn one certificate per megawatt-hour of power produced. These certificates can be bought and sold. Uniquely, both suppliers and consumers are obligated to purchase certificates as proof that a certain percentage of the energy they supply or use is renewable.

The percentage of supplied energy to be met from renewable sources will increase from 6.7 per cent in 2003 to 15.6 per cent in 2010. Though the onus is also on the consumers, they might not need to buy the certificates themselves but instead rely upon their suppliers to meet the legislated quota, who will then add the cost of the certificates to the energy price.

The renewable energy certificates, it is predicted, will not only edge out fossil fuel-based energy but also create stiff competition within the various renewable energy options as well. The wind energy sector may suffer in the ensuing competition, it is feared by some critics.

But the threat is not immediate, as several transitional measures have been proposed through 2007. A minimum price for the certificate has been guaranteed, and the current environmental bonus system (a form of subsidy for renewable energy producers) is to be rolled back gradually.

The certificate system, wherever set up in European Union, has had to face many hitches. Sweden too is now getting into the crucial phase of second generation energy sector reforms that will bring renewables on to competetive grounds with fossil fuels. Commercial investors may in the transition period look for greater profitability within the renewable options and make things tough for some renewable technologies but at the end of the day the renewable sector looks set to come up stronger.