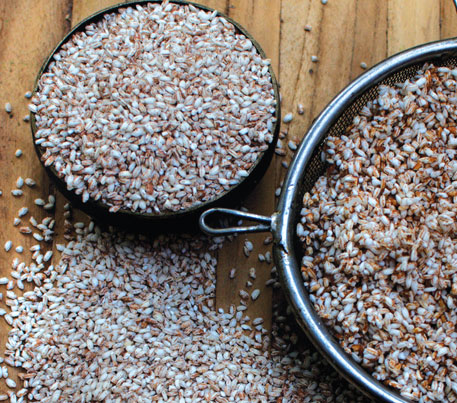 Many rice varieties are on the verge of getting lost forever. One of them is saathi, a coarse rice with a mild sweet flavour grown in the catchment areas of rivers in Uttar Pradesh, Madhya Pradesh and Haryana.

Saathi gets its name from the fact that it matures in 60 days, or saath din in Hindi. It is a good crop for waterlogged wastelands beacause it guzzles water from low-lying mud lands and prepares the land for other crops. It can be sown when monsoon sets in and is ready by the time heavy monsoon ends in the plains. In Bangladesh, the rice is called biroi, which is derived from Bangla words boro dhan, meaning large paddy grains.

Saathi is a low-yielding variety suitable for broadcast method of sowing, in which seeds are scattered by hand or mechanically over a large area. It is mentioned as a low-class rice in Ain-e-Akbari, a book on administration written during the reign of Mughal emperor Akbar, supposedly for its low profits.

But saathi is associated with festive rituals and people stock it for this reason. Kheer made with sugarcane juice and saathi, called rasiya or rasiayao, is used during chhath puja in Bihar. Saathi laddus are made for wedding rituals in eastern Uttar Pradesh and Bihar.

When freshly harvested seeds are cooked, they release so much starch that they look like pink lumpy porridge. Because of its mild sweet taste and sticky nature, this rice is used to make khichdi and kheer.

It is easily digestible and nourishing. A dish called maheri, made with overcooked saathi and buttermilk, green chillies and ginger, is considered good for liver disorders and indigestion. Laddus made with the rice, ginger powder, fried edible gum and nuts are considered suitable for winters and helpful in joint ailments.

Saathi rice is also eaten with daal and subzi, given that it has low glycemic index, which is the rate at which a meal increases blood sugar.