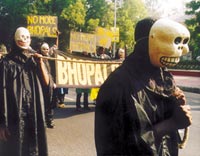 This is arguably the starkest reminder of corporate irresponsibility. In mid-October this year, us congressman Frank Pallone and eight colleagues filed an amicus brief on behalf of the more than 20,000 victims of the 1984 Union Carbide chemical disaster in Bhopal, India. The 23-page brief, to the us Court of Appeals for the Second Circuit, demanded the court hold dow Chemical responsible for the disaster. The brief was a response to a March 2003 decision by a us District Judge in New York dismissing all claims against the company. Victims had then appealed to the Second Circuit.

The brief upholds the 'polluter pays' principle. Affirmed by both international and American common law, the brief argues, "that principle cannot be ignored simply because the polluter has abandoned its facility, sold its shares in a subsidy or otherwise effected change of ownership."

Dow Chemical acquired Union Carbide Corporation in February 2001 and has yet to accept responsibility or address the liabilities it inherited. Over the last 19 years, victims have filed numerous lawsuits in an attempt to address health concerns, but to date their claims have remained unanswered.