The pursuit of green-collar jobs 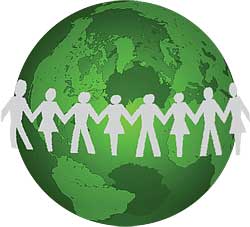 Efforts to cut greenhouse gas emissions and tackle climate change have created a new market, generating new opportunities, dubbed green jobs. According to a report by the United Nations Environment Programme, over the coming decades, millions of green jobs would be created in sectors such as energy, transport, construction, agriculture, forestry and industries


Moving away from fossil fuels would see a job reduction in oil, gas and coal industries. The emerging renewable energy sector would compensate this and create millions more jobs. By 2030


A shift towards sustainable transport would mean greater reliance on public transports like trains, trams and buses


Buildings have the capacity to reduce projected emissions by 29 per cent by 2020. As the next decade sees a transition to energy-efficient buildings


Emissions from agriculture could rise by 30 per cent between 2005 and 2020. Hence, there is a need to focus on organic farming, small farms and local food supply. These are potential sources of green jobs


It is difficult to reduce the carbon footprint of heavy industries like steel, aluminium, cement and paper. Since recycling helps save energy and reduce pollution, recycling industries would grow rapidly offering new jobs