Restrictions on use of natural resources in protected areas are driving the local communities dependent on forest produce for their survival to a state of deprivation. Conservation strategies can be sustainable only when it involves indigenous people in the management of forest resources. 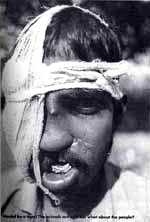 INDIA'S conservation laws have become the scourge of local communities in and around national parks and sanctuaries. The restrictions governing these protected areas curtail the indigenous peoples' access to natural resources to the extent their very survival becomes threatened. On the other hand, several cases have come to light of industrial and other interests exploiting the parks and sanctuaries with official connivance.

At a national workshop on declining access to and control over natural resources in national parks and sanctuaries held in Dehra Dun last month, several participants voiced concern over the increasing poverty in villages within and near natural reserves.

Said Rajesh Tandon, coordinator of the Society for Participatory Research in Asia (PRIA), who organised the workshop in conjunction with the Rural Litigation and Entitlement Kendra (RLEK), "Local communities are being denied access to vital natural resources, which are crucial to their economy, culture, religion and political systems. Yet, a number of protected areas are being exploited for urban and industrial interests. Large-scale tourism is being promoted to earn revenue, while poaching is continuing, sometimes in connivance with park officials."


The workshop was held not far from the proposed Rajaji national park, which when set up will deprive the Gujjar tribals of natural resources over which they have enjoyed traditional rights. Said RLEK president Avdhash Kaushal, "These communities who have depended on the forests for ages perceive the protected areas as restricting their rights and ability to earn a living by exploiting natural resources." Kaushal has taken up the cause of the Van Gujjars, and with the help of the Centre for Science and Environment (CSE) in Delhi, has presented a proposal that would enable them to manage the forests as well as protect them.

The Union ministry of environment and forests (MEF) has neither involved the people in development, management and protection of forests, nor does it grant them their rights. Kaushal said, "The current strategy of conserving wildlife and biodiversity in the country has lead to widespread displacement, harassment and neglect of forest-dwellers, nomads and tribals living in the areas. There is an urgent need to redefine the strategy of conservation through protected areas to include local people and tribals and not exclude them."

It was thanks to the efforts of NGOs such as RLEK, which have strongly advocated the cause of tribals and forest folk, that minister of state for environment and forests Kamal Nath grudgingly revealed that six lakh tribals and forest-dwellers had already been displaced in the last two decades.

Population density in and around sanctuaries is usually high and forests have been the main, and often only, source of livelihood for the people. In Simlipal, 65 villages with a population of 20,000 have been totally deprived of government development programmes and even relief in times of drought. Said Santhosh Mohanty of the Social Research Development Council in Baripada in Orissa, "Our district is one of the most neglected in the country and the primitive tribes within the sanctuary are the among the most deprived. The process of development has come to a complete halt."


The grazing rights of the local people are completely terminated in the case of national parks, whereas in sanctuaries, such rights are conceded with several restrictions. The poor have to pay various taxes before they are permitted to graze their cattle.

The Gujjars who used to earlier bribe their way into the Rajaji national park, now find even this option closed to them since the proposal was made for converting the sanctuary into a national park. The people in other sanctuaries have had to transform their lifestyles dramatically. In the Sanjay Gandhi national park in Maharashtra, Kanha national park in Madhya Pradesh, and the Sitamata and Bharatpur sanctuaries in Rajasthan, there has been a transition from a predominantly livestock-based economy to an agrarian one.

Studies show that in states such as Orissa, Madhya Pradesh, Himachal Pradesh and Bihar, more than 80 per cent of the forest-dwellers depend on forest produce for 25 to 50 per cent of their food.

B K Mahapatra, an activist of Hakimpada in Raigadh district, said, "For most of Orissa's predominantly tribal population, minor forest produce is a major source of livelihood because development programmes have had little impact in the remote areas."

A major problem with forest laws is that tribals and forest-dwellers are ignorant of their implications. Nissar Ahmed Sheikh of the Astha Sansthan, an NGO working among the tribals in Phulwari Ki Nal sanctuary in Udaipur, said, "How can illiterate people understand the provisions of the Wildlife Act? Only when they are caught violating some provisions of it, do they get to know the laws exist."

Sometimes the conflict between the local communities and the authorities takes the form of violence. Several cases of assaults on forest-guards have been reported from various sanctuaries, especially Kanha, Ranthambore and Sariska.

One of the major problems inherent in the management of India's national parks and sanctuaries is that very often, some of the wild animals sought to be protected proliferate and injure or kill human beings and cattle, and damage crops. Such instances are proliferating around a number of sanctuaries and parks of late. Said Thomas Ambalavayal of the Wynad Samrakshana Samiti in Kerala, "In spite of abundant vegetation and food in the forests, herds of elephants raid the crops and plantations for food. The people are unable to take any measures to curb the animals' incursions into cultivated lands as these may be deemed harmful to the wildlife."

Often, the severe curbs imposed on human activity can adversely affect the sanctuary itself. In Bharatpur, when grazing was disallowed in the bird sanctuary, the grasslands thrived, but this dissuaded the birds from nesting in the tall grass. Only when grazing was resumed did the birds nest again. The Valley of Flowers in Garhwal is also facing a infestation of weeds following a ban on grazing.

It is only over the last one or two years that nongovernmental organisations (NGOs) have begun to advocate the cause of these deprived people and build awareness about laws and issues. But they soon found themselves in direct conflict with both the government and vested interests.

The 1988 National Forest Policy envisaged people's involvement in the development, management and protection of forests and recognised the dependence of tribals on them. It stated that the fuelwood, fodder and other requirements of the local people were to be treated as first charge on forest produce. However, the Wildlife Protection Act, 1972, and its amendment in 1991 deny people the customary right over such flora and fauna.

Over the last few years, the conservationist lobby has been gaining strength worldwide, and in India, this lobby perceives local, forest-dependent communities as a major threat to forests and wildlife. Under pressure from them, the government, too, has been enacting laws that pay little attention to the local people and their needs. In many cases, local officials have resorted to draconian methods to implement these laws. But at the same time, many of them have also connived with contractors and unscrupulous middlemen to exploit the forests illegally. The result is that despite the many conservation efforts launched over the past decade, dense forest cover has been declining in forest reserves and protected areas (See box).

One of the reasons for this decline is the denotification of already notified sanctuaries for mining and other industrial activities. Says Aman Singh of the Tarun Bharat Sangh, an NGO working near the Sariska sanctuary, "While the villagers have been displaced and their livelihood disrupted, mining activity has been allowed in the Sariska tiger reserve to ravage the forest areas."

Similarly, in the Babukhand range forests and sanctuary in Puri district, 9 square km of land is proposed to be dereserved to set up a beach resort.

According to Avdhash Kaushal, there was consensus at the workshop on the fact that the problems facing many of the sanctuaries were similar. One of the conclusions reached was that NGOs could form a network, which could raise such issues in public fora and put pressure on the government to modify laws or reform the implementation process.

There are considerable differences of opinion on the management of protected areas. D N Tiwari, director general of Indian Council of Forest Research and Extension, admitted, "Without people's involvement, conservation cannot succeed. Tribals are also part of the biosphere, and their existence is as much endangered as that of any animal species we may try to conserve."

Some participants at the workshop, however, wanted more stringent conservation laws. Said Chhatrapati Singh, director of Centre for Environment Law, "We are only trustees of the land and natural resources, we have to conserve them for future generations. Even the Gujjars are only trustees of their habitat. They can participate in the management, but can never be owners of the land."

On the other hand, H S Panwar, director of Wildlife Institute of India, prides himself on having successfully resettled the tribal community that used to live in the Kanha national park. He suggested resettlement plans could be worked out for different national parks, without having to concede ground to forest-dwellers.

The seminar brought together more than 50 social activists and NGOs from all over the country. There were tribal community members, and representatives from the media and forest and wildlife research institutes. The specific recommendations that emerged include a campaign for recognition of customary rights of local people (including nomads) living inside and around protected areas on use of natural resources, and making local people responsible for management of national parks and sanctuaries. The management proposal put forward by RLEK and CSE, which was worked out with the Van Gujjars, was considered an appropriate model to be followed in sanctuaries where wildlife conservation and people's needs are in conflict (See box).