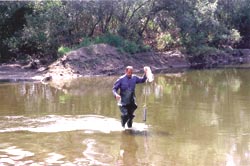 NATO's air campaign against Yugoslavia in 1999 saw bombing of many factories. The world media covered the campaign extensively. And then suddenly there was a hush. The eerie silence has been broken now by a new report by the Washington-based nonprofit organisation Institute for Energy and Environmental Research (IEER). In 1999, the media gave lengthy accounts of the campaign almost everyday. But what it failed to do was to report the extent and magnitude of the impact of the air assaults. The IEER report fills up that vaccum. It reveals that the backlash of the air strikes could be long-term environmental and health effects. The report warns that precision bombing of industrial facilities can lead to contamination and may violate international humanitarian law.

People living near the targets may also be exposed to greater health risks from contamination of the air, water, and food products, said the report.

The institute studied the NATO bombings of the Zastava car factory in Kragujevac, some 100 kilometers south of Belgrade and a petrochemical plant, a fertiliser plant and an oil refinery in Pancevo, about 20 kilometers northeast of the Yugoslavian capital. The two sites were designated as environmental "hot spots" by the UN environment Programme Balkans Task Force as a result of the bombings. "There is no doubt that the bombings released contaminants such as mercury but it is impossible to precisely determine their effects because of lack of data about pre-conflict pollution levels," said Sriram Gopal, a scientist at the institute who was the report's main author. In Pancevo, the bombings resulted in major releases of the toxic chemicals dichloroethane and mercury, pollution created by bomb-related fires, and other environmental damage, the report said. In Kragujevac, bombed transformer stations at the car factory leaked toxic PCBs.

The institute revealed its investigation was hampered because the US Department of Defence rejected its Freedom of Information Act request for the targeting criteria used during the bombings.