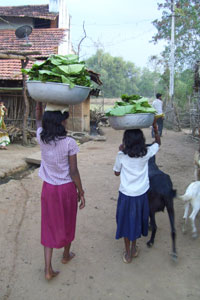 Tribal residents of village Bod in Baitul district of Madhya Pradesh have refused to hand over three truck-loads of tendu leaves gathered by them to the forest department, demanding that they be paid Rs 250 for 100 bundles of leaves instead of the Rs 75 they are being paid now. Some 100 villages in Baitul and Harda district have been demanding a substantial raise in tendu leaf collection wages for several years now, but Minor Forest Produce Federation of the state has responded to this by making paltry raises.

Tribals complain that tendu leaf plucking wage has been raised by slightly more than double over a course of 23 years since 1989 when government took over tendu collection. “The wage then was Rs 30,” says Munna Singh Advasi, a resident of Bod, “The current wage of Rs 75 is grossly inadequate, and way below the state’s minimum wage of Rs 183.” He also alleged that malpractices by the forest department cut further into the meager wages. “In places where villagers are not organised, they have to give away 105 bundles for Rs 100, and pay a cut to the forest department in addition.”

According to calculations made by tendu leaf pluckers, it takes no less than 12 hours for two workers to collect 100 bundles of 50 leaves each, tie the bundles, carry them to the tendu khal (drying area) and spread them out. “At Rs 75, the two workers are earning just Rs 37.50 each for 1.5 days of work,” says Anurag Modi of the non-profit Shramik Sanghu, which is helping the villages organise. “This is seven times less than the minimum wage. “

He says that if the fair wage is paid, the cost of 100 bundles will rise to more than Rs 500 “At present tribal’s are demanding only half as much.” Modi says that after Madhya Pradesh and Chhattisgarh were made two different states, Chhattisgarh has made an amendment in the Madhya Pradesh Tendu Patta (Vyapar Viniaman) Adhiniyam of 1964, making it necessary to take minimum wages into consideration while determining tendu leaf plucking wages. “But Madhya Pradesh has not even bothered to change the legislation,” he says.

He said that a system of paying a bonus to tendu leaf pluckers is also in place, but there is no transparency in the process of determining the bonus amount, and bonus money is often withheld for as much as two to three years, to be handed out with great pomp at the time of elections to influence voters.

In February, Shramik Sanghu, in association with the tendu leaf pluckers, had submitted a memorandum in this regard to the chief minister, governor, and the Scheduled Tribes Commission. “The only response we have had is that instead of collecting leaves in bulk at the end of the season which was the usual practice, forest department, which is in charge of collection, has this year started lifting small quantities of leaves periodically, to deprive the tribals of bargaining power,” says Modi. “Bod is the only village which has a good amount of leaves in its possession to be able to bargain.

Modi says that if the government fails to act on people’s demands regarding wages, Shramik Sanghu will move high court on the issue.