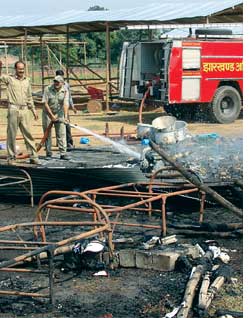 ARMED with spears, swords and torches, about hundred tribals of Bandih village in Bokaro marched to the camp office of Jaypee Cement at midnight on October 22 and set it on fire after roughing up the guards. They were angry that the company was not giving them enough jobs after taking away their land. In Chakulia block of Jharkhand's East Singhbhum district alleged land sharks were thrashed on November 7.

Jaypee Cement, which is setting up a plant in Bokaro in collaboration with sail, had promised 5,000 jobs to local people. Young people in Bandih, however, alleged that company officials were ignoring the rightful claimants and giving jobs to candidates recommended by political parties. "We have given our land and we have the first right to employment. The youth had supported the plant but equations changed in the past few months after the company started going back on its promise," said a youth refusing to divulge his identity. Tribals from 150 villages are working at the 20-hectare (ha) project site.

The attack has caused panic among Jaypee Cement officials. The project was one of the few that took off without much opposition from tribal groups. "We are taken aback. The company has never backtracked on its promises. It's a hasty step by the villagers," said A K Sharma, a senior official of Jaypee Cement.

In Chakulia, people of Barigaja village are not letting outsiders enter after they beat a retired crpf official and his two associates on suspicion that they were trying to purchase about 690 ha at a throwaway price on behalf of a power plant. Villagers got suspicious after Muni Ram Murmu tried to convince tribals to sell their land. "Land sharks and middlemen are moving around the village. We have told them several times that land will not be given for industry," said village leader Ghanshyam Mahato.