Stand-off ends between forest officials and villagers in Ranthambhore, but roots of the conflict remain 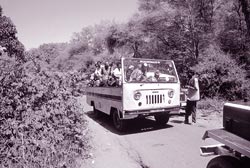 all herders and livestock, who had intruded into the 392-square-kilometre (sq km) Ranthambhore National Park in Sawai Madhopur district, Rajasthan, have been driven out ending one month of drama. The tension between 100-odd villages around the park and the forest department, however, can spark more trouble in the future. There seems to be no possibility of a long-term solution to the conflict over grazing, which is an annual event in the park and often leads to violent confrontations (see: 'Bone of Contention'; Down To Earth, Vol 9, No 7, August 31, 2000).

At present much of the 942 sq km of the tiger reserve in which grazing is permitted -- which includes two sanctuaries and a game reserve, but excludes the national park -- has little or no grass. In the absence of any fodder supply by means of drought relief, it was inevitable that the villagers would take their livestock to the park.

Superintendent of police Dinesh N M, and conservator of forests G Vishwanath Reddy decided to take preventive measures to check the entry of villagers into the park, which is also reeling under a drought. While villagers complain that the officials committed atrocities and implicated them in false cases, forest officials maintain that they were only implementing a Supreme Court order to prevent grazing.

The situation reached a flashpoint on August 24, 2002, when police and forest officials apprehended five residents of Uliana, a village on the periphery of the park, on charges of logging. Following this incident, villagers turned violent. They thrashed the deputy superintendent of police, Prem Singh, and snatched the rifles of the police party. Later, the police opened fire in an effort to regain their weapons, injuring one villager. However, officials and villagers give conflicting versions of the way the incident unfolded.

Following widespread unrest, politicians came out in support of the villagers. Prominent among them were Abrar Ahmed, former Union minister and member of the Rajya Sabha, and his wife Yasmin Abrar, member of the Rajasthan state assembly -- both of the Congress party. Significantly, elections to the assembly are due in a year's time.

Reddy points out that when the forest department was busy managing the influx of pilgrims at a temple inside the park between September 8 and 10, villagers entered the park with the livestock. By September 16, the number of domestic animals in the park peaked. Reliable estimates of their number vary from 2,000 to 7,000. Some villagers acknowledged in muted tones that this was done at the behest of political leaders wanting to score brownie points.

But the fear of contempt of Supreme Court and pressure from the national media spurred the authorities into action. The state government sent a string of ministers and top officials to remove the villagers and livestock from the park.

The forest department bought fodder and has offered to sell it at cost price to resolve the crisis. It is, however, in no hurry to sell the fodder. Down To Earth found that one depot had no means to even weigh the fodder. Even if they did, the villagers won't buy it, as they want it free of cost. Though the villagers have been given cooking gas connections to deter them from collecting wood, they claim that they do not have money to refill the cylinders. The month-long battle might have subsided, but the war over grazing continues.