The Union Budget 2021-22 announced Jal Jeevan Mission (Urban) to bring safe water to 2.86 crore households through tap connection. This in line with the Centre’s rural water supply project launched in 2019.

Finance minister Nirmala Sitharaman announced an outlay of Rs 50,011 crore for this scheme, about 4.5 times the revised budget for 2020-2021.

The mission is the country’s 12th attempt to connect every household with tap water. This time the target year is 2024. India has failed miserably to fulfil its past promises around this objective.

Jal Jeevan Mission (Rural), for instance, has been able to cover only around 34 per cent of the targeted households (65.5 million) in rural India, according to the latest data from the Union Ministry of Jal Shakti.

After the Centre’s flagship Swachh Bharat Mission for building toilets in every household in India’s villages was declared a success by October 2019, the supply of household tap water stands as a big promise and necessity in rural India. 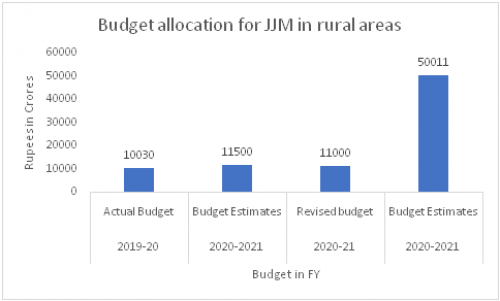 But simply rolling out an ambitious mission does not ensure sustainable supply of household drinking water in rural India which has been haunted by the ‘slippage’ problem. It means villages or habitations covered with safe drinking water facilities slip back to 'not-covered' status due to reasons that include drying up of water source or collapse of facilities due to non-maintenances.

According to the CAG report, which analysed the state of rural water supply between 2012 and 2017, 4.76 lakh habitations had slipped from 'fully covered' to 'partially covered'.

The phenomenon was high in Andhra Pradesh, Bihar, Karnataka, Jharkhand, Odisha, Rajasthan, Uttarakhand and West Bengal. Hence, projects focusing on the recharge the source of water, which in most cases is groundwater, should be also planned.

The improvement of institutional mechanisms for the implementation of the groundwater policies should be highlighted. There is a need to involve communities, especially the women, to play a key role from planning to implementation.

The current budget allocates Rs 9,994 crore for the toilet++ programme launched in 2019, higher than the last year’s revised budget of Rs 6,000 crore. 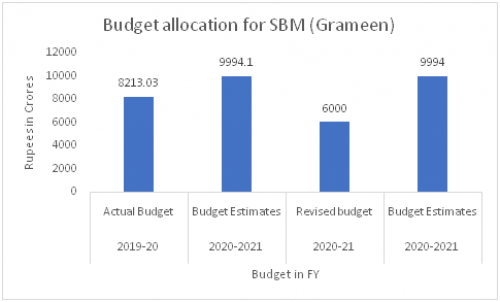 There is a need to make changes on the ground as well by retrofitting the wrong designs and also treating wastewater and untreated faecal sludge. Till date, small stray projects could be seen on treatment of the faecal sludge and wastewater but it is time to bring about change at a larger scale. Since the rural areas demand onsite treatment of faecal sludge, options should be rolled out on this.

A need for capacity building and awareness programmes has been recognised by the current budget and hence a sharp increase in these components can be seen. For example, the revised estimate for 2020-2021 shows an allocation of Rs 20 crore for information education and communication which has increased almost 3.5 times in this year’s budget.

In 2017, the Narendra Modi government launched the Har Ghar Jal programme to ensure piped supply of drinking water to every household. By April 1, 2018, however, only 20 per cent of rural households could be connected to piped water supply, as per the records of the department of drinking water and sanitation.