As the hill state enters dry months, a government initiative to revive 70,000 dying springs instils hope in its water-scarce villages 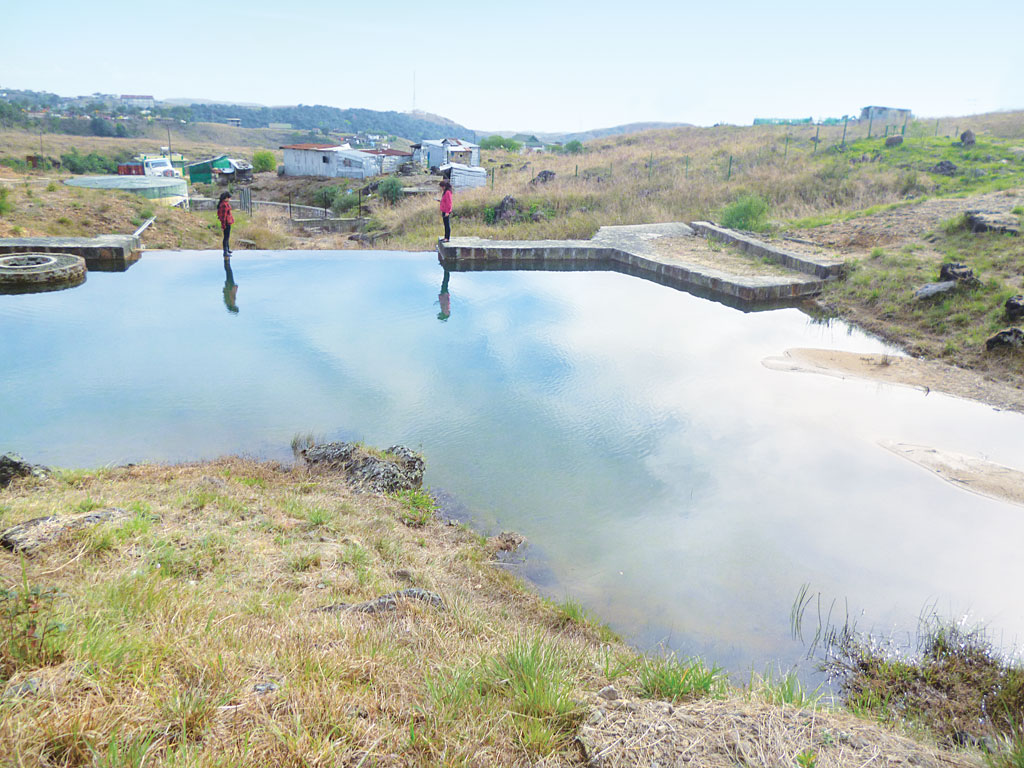 The nearly dead Wah Shari Spring has given rise to a pool just in six months (Photo: Karnika Bahuguna)

For decades the residents of Khliehshnong village in Meghalaya struggled for a regular supply of water during the dry months of November-April, despite getting abundant rainfall and being surrounded by six springs.

The springs would remain dry. “In the absence of adequate facilities to extract groundwater in the hills, we would buy water from tankers to meet daily needs,” says Phosterwell Tariang, the village head.

One of the six springs, Wah Shari, trickled about five litres of water a minute in March, which was hardly sufficient to cater to the drinking water needs of the 1,000 households in Khliehshnong, let alone meet their irrigation demand. But by July, Wah Shari was spewing 492 litres of water a minute and had created a pool around it. Its discharge increased to 588 litres a minute by the end of November. The residents now get pure spring water for free.

This remarkable turnaround has been made possible by the Meghalaya Basin Development Authority (MBDA)—the only authority in the Northeast to protect groundwater, springs and rivers—which revived Wah Shari as a pilot project under its Spring Protection Initiative.

Since 2014, Spring Protection Initiative has been trying to revive the hill state’s 70,000 perennial springs that had for generations provided drinking water to nearly all the 6,800 villages and fed several rivers in the Brahmaputra and Barak basins.

But over the past few decades, they have dried up or become seasonal as large-scale deforestation, rampant mining and developmental activities have either silted them or destroyed their catchment areas. “Meghalaya is the only state that is so much dependent on springs. But nobody has cared for them,” says Aiban Swer, director of MBDA.

As part of the revival process, MBDA is preparing an online atlas that will carry details of all the springs in the state, including their names, GPS locations and quantity and quality of water they release. This will help understand the extent of deterioration and the kind of intervention these springs require. “So far, we have mapped 1,000 springs across 11 districts,” says L Shabong, an MBDA official. “It indicates a drastic reduction in the volume of water these springs release. Water quality of 20-35 per cent of the springs has deteriorated to the extent that it is unfit for human consumption,” he adds.

While reviving these springs to the pure and crystal stage seems a herculean task, the success story of Wah Shari offers hope.

The main challenge in reviving Wah Shari spring was recharging its aquifer on the hill slope. For this, MBDA roped in the state’s Soil and Water Conservation Department and the village community to dig trenches along the hill slope that acts as the catchment area of the spring. These trenches, usually 0.6 metre wide and 0.45 metre deep, helped check water runoff and soil erosion. Saplings were planted in each trench to further tackle soil erosion. Within four months, water discharge from the spring increased by 100 times, creating a pool around it.

To purify the water, an indigenous filter has been constructed within the pool (see illustration). The filtered water now gets collected in a tank, nearby the pool, which supplies water to households in nearby villages and three boarding schools. Officials have fenced off the catchment area of the spring to prevent contamination by humans and animals. They are also sensitising the village residents not to damage or pollute the catchment area. 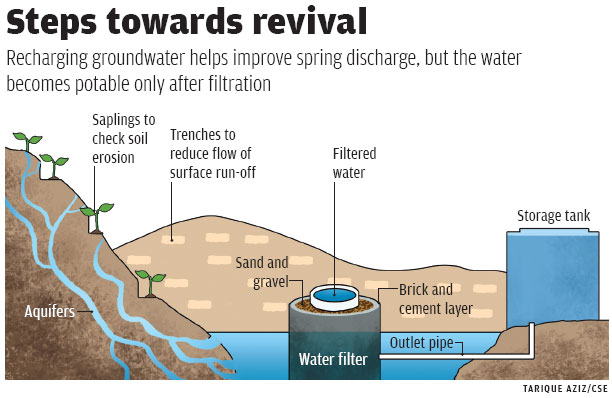 Since most springs are privately owned, the state is planning a social survey to find out ownership of springs, the number of families dependent on them and ways to engage communities in catchment protection.

To make the initiative a success, the government has set aside funds from the State Action Plan on Climate Change. The World Bank has also promised to extend its support to the initiative.

MBDA has created a cadre of 300 master trainers by roping in volunteers from schools and colleges. They will visit communities and train the youths in mapping the springs. Called para-hydrologists, they will monitor the springs and collect the data, says Shabong. Communities are being encouraged to create nurseries in the spring-shed area. So far, people have set up 65 nurseries for planting in spring-shed areas.

MBDA officials say mapping and revival of springs will take at least six years. However, some experts say the initiative will take more time to show significant results considering that the state is still in the initial stage of mapping its springs.

The indigenous water filter designed by MBDA may not work for all springs as the contamination varies from place to place. For instance, aquifers in the Jaintia Hills have turned acidic due to rampant rat-hole mining in the region till it was banned recently. Springs from these aquifers would require separate treatment from those contaminated by organic pollutants.

Sonali Saha, visiting faculty at St Anthony’s College in Shillong who trains students on conservation of freshwater ecosystem, says sensitising students, communities and other government agencies about water quality, quantity and ecosystem services is an important step to ensure that the springs remain free-flowing.

The government should pay close attention to these suggestions if it wants to avert water crisis for ever.