Water was seen moving through the gates of the Three Gorges Dam to the smaller Gezhouba Dam, around 26 kilometres southeast

Floodwater from reservoirs in the Yangtze river basin in China was discharged after excess rain since the onset of the monsoon beginning June 1, 2020.

Such measures were taken to regulate the flow of water after excess rain pushed water levels in China’s rivers and lakes to record levels, leading to floods that displaced millions within the Yangtze river basin itself.

Images acquired by the US’ National Aeronautics and Space Administration (NASA) on June 30 revealed the spillway gates of the Three Gorges Dam and the Gezhouba Dam were open.

Water was seen moving through the gates of the Three Gorges Dam — 2,300 metres long and 185 m high — to the smaller Gezhouba Dam, around 26 kilometres southeast.

The images were captured using NASA’s Operational Land Imager on its Landsat 8 satellite and are composites of shortwave infrared and natural colour to distinguish the water. 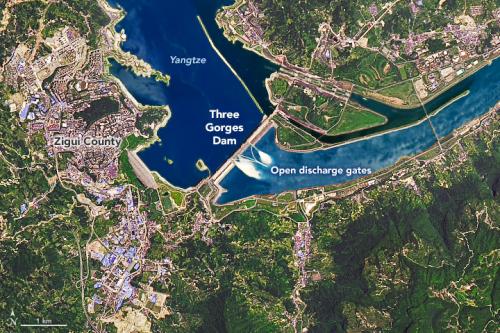 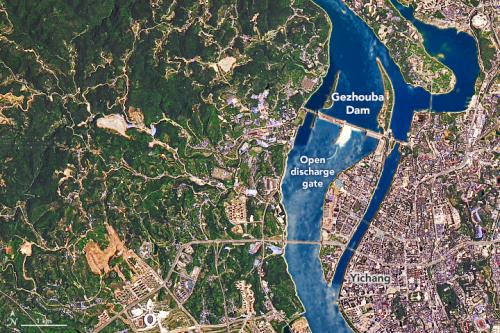 The water around the spillway gates of the dam appears to be whiter because of the way downstream water reflects light. The images were acquired during the first major flooding of the monsoon. A second wave of flooding, referred to as the ‘No. 2 flood’ by local media, hit the region in July.

Continuous adjustments were made by dam operators to the water outflow from the reservoirs at the time of flooding.

Water level went up to a record 164.18 m in the Three Gorges Dam July 19, according to the Three Gorges Corporation that runs the dam. The previous high level was at 163.11 m, during the flood season, since the dam became fully operational in 2012.

Floodwater was held or ‘absorbed’ by more than 2,297 reservoirs in the region — including one behind the Three Gorges Dam — this year.

The Yangtze — winding 6,300 kilometres through China — is Asia’s longest river. The river, along with its network of lakes and tributaries, is used to generate power, control flooding and store water for drinking and irrigation.

There are now tens of thousands of reservoirs in the region, with numerous dams across the river.