Despite vehement domestic and international opposition, China has decided to go ahead with the massive new dam project on the Yangtze 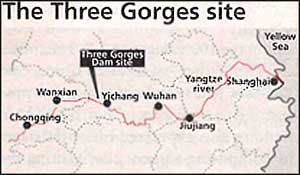 THE Chinese government hails it as the second largest construction since the Great Wall. Premier Li Peng is its staunchest advocate. Environmentalists condemn it as an environmental disaster waiting to happen. This is the Three Gorges, the mammoth hydroelectric dam that will harness the turbulent Yangtze river with a 185-metre high wall holding back a 632 sq km reservoir -- roughly the size of Singapore.

The dam is expected to produce 84 billion kilowatt-hours of electricity annually which, says the government, will end the perennial electricity shortages in central and eastern China. But it will also wreak havoc on the Yangtze's ecosystem, counter conservationists. It will spell doom for the river dolphins and the Siberian white cranes. Besides, the dam will displace 1.3 million people, submerging 100 villages and 170 factories. The raging debate between the pro- and anti- Three Gorges supporters is about to reach a climax, as the Li Peng administration gears up to launch the project by this year-end.

The "father" of modern China, Sun Yat-Sen, had visualised the grand project 70 years ago. Chairman Mao Zedong also expressed his enthusiasm by composing a poem after visiting the Yangtze in the late '50s. "Walls of stone will stand upstream to the west... The mountain goddess, if she is still there, will marvel at the world so changed," he had raved.

But scientists and government officials of the Mao era were not enthralled by the project. For generations, Chinese artists have depicted on scrolls the scenery of the region, the rolling meadows and farmlands, and simple peasant lifestyle. Critics argued that the giant project would ruin natural beauty, historical sites and destroy human habitat.

Following these unfavourable responses, the project was shelved, to be revived in 1980. But it faced a volley of protests. Dai Qing, a journalist working with the state-run newspaper, Environment Daily, published a book Yangtze! Yangtze!, launching a tirade against the proposed dam. The State Council, China's cabinet, reacted by placing a 5-year moratorium on the project. Later, in June 1989, after the explosive Tiananmen Square crackdown, the government took advantage of the renewed controls it had imposed on the nation. It quelled all anti-dam voices and went ahead with the Three Gorges project. Dai Qing was arrested and her book was banned.

Since then, Beijing has not wasted any time in setting up the China Yangtze Three Gorges Project Development Company. This year, it awarded contracts for preliminary works. Now the search is on for foreign investors. But despite vigorous hardselling by Chinese officials, the task is proving daunting. The financing institutions and agencies in the West would like to have a finger in this gigantic pie. But they are shying away at the very thought of the hue and cry their own environmentalists are bound to raise.

Already in the us, 7 environmental groups have filed a lawsuit against the us Bureau of Reclamation and the Army Corps of Engineers, government agencies which had been acting as consultants to the Three Gorges project since 1940. The charges were that such assistance would violate us environmental laws. Under this pressure, the Bureau withdrew itself from the project in late 1993.

In Canada, the Toronto-based environmental group, Probe International, is spearheading the anti-Three Gorges movement. The executive director, Patricia Adams, warns that her organisation will target any export-credit agency, aid organisation or company supporting the Chinese dam. Probe's focus is mainly on the displacement issue.

Li Peng's government has drawn up an elaborate resettlement plan, including direct compensation, and training and development programmes. China's officials are convinced it would definitely improve the living standard of its peasants. But the key problem, say ecologists, is that farmers in fertile river valleys would be forced to migrate to poorer and congested villages. Going by China's past history, any resistance put up may provoke heavy-handed policing. "I can easily see the entire region becoming a police state within a police state," says Robin Munro, Hong Kong director of Human Rights Watch/Asia.

In this confusing backdrop, it is not surprising that the World Bank has steered clear away from the Three Gorges project. Learning a bitter lesson from the Narmada dam controversy in India, the Bank has repeatedly refused any involvment in yet another potentially explosive scheme. This has sent negative signals to many financiers.

With many sponsors preferring to stay away, the Li Peng administration has had to fall back on its own resources. Most of the funds are now expected to come from government revenues, especially the state-controlled electricity sales. The Three Gorges Corp has also taken over another large dam, Gezhouba, to use its profits to support the new project. This may, however, lead to a rocketing inflation rate and complicate the government's efforts to reduce a bloated budget deficit. But the Chinese leaders seem obdurate. "We will surprise the world," declared Lu Youmei, president of the Three Gorges Corp. "Very few countries could build a dam of this size. China has the ability."