The interative created by a non-profit illustrates shows decades of dam-building has put river basins like the Mississippi, Yangtze, Amazon and Mekong on life support 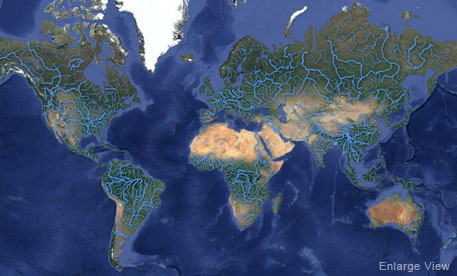 In a first of its kind initiative, non-profit International Rivers is launching “The State of the World's Rivers”, an interactive online database that illustrates the role that dams have played in impairing the health of the world's rivers. A glance at the maps and data they hold  is enough to make anyone realise what humans have done to their water lifelines.

Based on Google Earth technology, the interactive has mapped nearly 6,000 dams across 50 of the world's major river basins, ranking their ecological health according to indicators of river fragmentation, water quality and biodiversity. The dams featured comprise a small percentage of the more than 50,000 large dams that clog the arteries of our planet.

The database illustrates how decades of dam-building has put the Mississippi, Yangtze, Paraná, Danube, Amazon, Mekong, and other basins on life support, degrading biodiversity and water quality.

For example, the controversial Tigris-Euphrates basin in West Asia (primarily Iraq) is the 4th worst in both fragmentation and water quality and 10th worst in species density. “Past decades have witnessed an increase in trans-boundary water conflicts and a significant reduction in freshwater marshes and species that rely on them,” says the International Rivers press release.

People can use the database to understand the health of rivers in their own region, advocate for change in how they are managed and argue for a reduction in fragmentation as well as an improvement in water quality.

“River basins fragmented by dams and polluted by mercury accumulation are public health emergencies that impoverish people’s quality of life and livelihoods. Yet, institutions like the World Bank are investing with a renewed vigor in damming the world's rivers,” says the non-profit as it questions these investments.

The non-profit adds that most of the basins with high rankings on degradation are precisely where dam-building is projected to be the most active – and where International Rivers is committed to protecting against further fragmentation and degradation.

How to use it 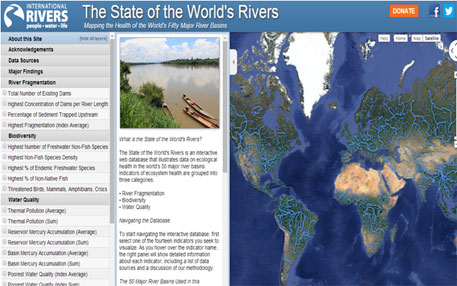 Users can view how each individual basin ranks in fragmentation, biodiversity, and water quality, as well as explore 10 of the most significant river basins in more depth. They can also have a look at the network of rivers each continent possesses. The database clearly gives sources for each set of data and allows you to see hot spots of dams across the world that are operational, planned, suspended or in mid-stages.