Every household now has an extra toilet, due to SBM. Yet people are forced to defecate in the open because of acute water scarcity 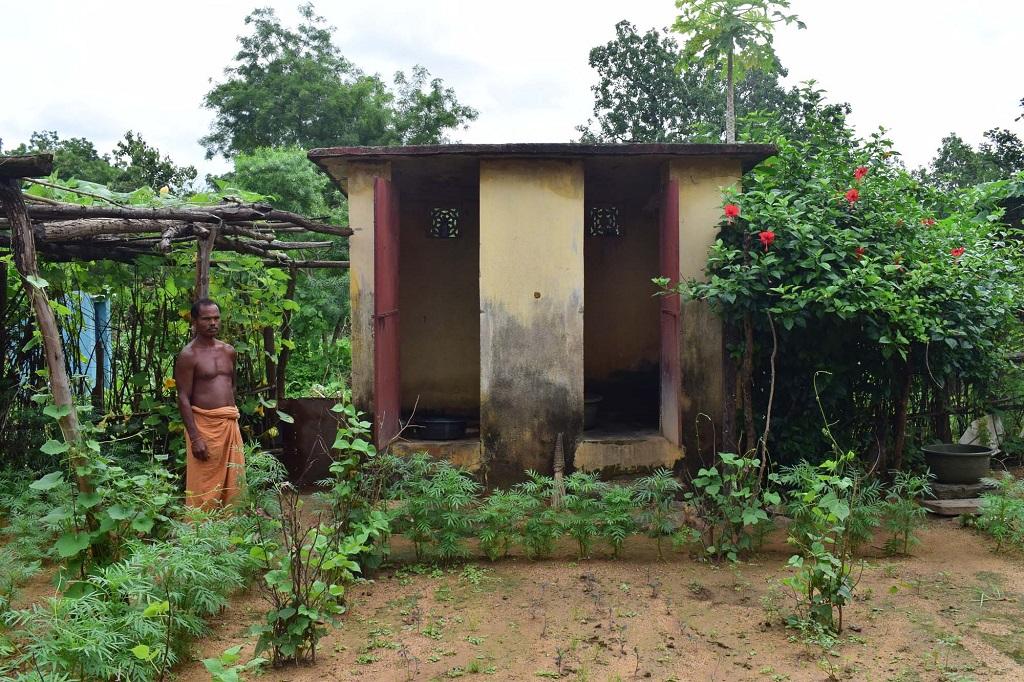 Bibatsa Thela of Sikachhida village, Odisha in front of his toilet constructed in 2006. He says it is much better and spacious than the one made under SBM in 2014. Photo: Priya Ranjan Sahu

In Odisha, a few villages had achieved open-defecation free (ODF) status prior to Swachh Bharat Mission (SBM). But, with time, they have lost momentum.

In 2006, then Prime Minister Manmohan Singh was scheduled to visit Sikachhida village in Balangir district. The purpose was to see the excellent community sanitation model created by the villagers with technical and financial support from non-profit Gram Vikas. The visit was called off at the last moment due to heavy rain but the village remained the centre of attraction for quite some time.

“Many curious people came to Sikachhida to take a look at our bright yellow toilets, the open well that helped recharge groundwater, a renovated pond and the overhead tank that ensured us round-the-clock water supply in one of the most water-scarce regions of the country. Those were unique in those times,” said Bibatsa Thela, a farmer with marginal landholding.

Sikachhida has over 120 households. Though till 2006, only 111 houses had toilets, the remaining was covered subsequently and the village became ODF.

Some 15 km away, residents of Kanakpur village had also made similar efforts, constructed their own toilets at the cost of about Rs 3,000 each using locally available materials and achieved ODF just 12 days after SBM was announced in 2014. People celebrated their ODF status with much fanfare.

However, people in both the villages are now struggling to maintain their status. Under SBM, they had requested the authorities that the amount of Rs 12,000 per toilets be spent on renovating their existing toilets, and repair the water supply system that was set up in early 2000s.

“But our pleas fell on deaf years. The officials said that if we did not construct another toilet under SBM, thus we would forfeit them,” said Surekha Sai.

So every household has an extra toilet now though most use the decade-old spacious toilets. Water stress becomes acute in summers when both running tube wells and intake well dry up and people are left with no choice but to defecate in the open.

The situation in Kanakpur, which has 71 families with a population of 400, is worse. After declaring themselves ODF, the villagers had a system of fine of Rs 200 for anyone defecating in the open. The system was lifted a year after the launching of SBM because of water scarcity.

“Over 50 per cent of the village have stopped using toilets and go out for defecation during summer,” lamented Tarangini Mishra, a resident.

The district collector of Balangir, Arabinda Dakua, admitted that “the real challenge is to connect the toilets with water supply”.

“It is a tall order indeed considering that out of six rivers in Balangir, only Tel river has perennial flow and rest are dry throughout the year except the rainy season. The depleting groundwater makes the tube wells go dry in summer,” Dakua said.

The situation is peculiar in another water-stressed, yet heavily industrialised district of Sundargarh. Like in Balangir, Sundargarh shows 100 per cent individual household latrine as per the baseline survey of 2012.

To help the government meet the October 2 deadline, the officials have set up toilets but are yet to provide them with water connection.

Niranjan Sahu, executive engineer with the Rural Water Supply and Sanitation Department, said all villages in nine blocks under his division have toilets.

“We have the target to connect all those toilets with piped water by March 2020,” Sahu noted.