World awakes to new danger: use of water as weapon of war

Using water as a weapon to weaken people is a tactic used in Syria, other countries of West Asia and Africa

Increasing instances of use of water as a weapon of war in ongoing conflicts is now a new worry for the United Nations and other agencies which till now had been working to provide better water and sanitation facilities to these countries.

When water supplies in the besieged Syrian city of Aleppo were recently deliberately cut off by armed groups for eight days, at least 2.5 million people were deprived of access to safe water for drinking and sanitation. "Preventing people's access to safe water is a denial of a fundamental human right," warned the UN Secretary-General, Ban Ki-moon, last week and pointed out that deliberate targeting of civilians and depriving them of essential supplies was a clear breach of international humanitarian and human rights law.

In the four-year Syrian civil war that has claimed 150,000 lives and displaced almost nine million people, water has been used by all the parties to conflict, including government of president Bashar al-Assad.

Using water as a weapon to weaken people is a tactic used not only in Syria, but also in the West Asia and Africa, including Iraq, Egypt, Israel and Botswana.

This year in April, days before elections in the country, Iraq’s waters were seen becoming a weapon of war. According to some news reports, Baghdad, ironically, had been divided in two starting a few days ago: one part is suffering from water scarcity, while the other part is flooded. This happened because army used water to inundate the areas where terrorists that it was fighting were present. This later pushed terrorists to use the same tactic.

Maude Barlow, an expert with Council of Canadians and Food and Water Watch, has said that this has been a trend for years now. “During the Iran-Iraq war of the 1980s, the Mesopotamian Marshes were drained,” she said. “Iraqi President Saddam Hussein drained them further during the 1990s in retribution against Shias who hid there and the Marsh Arabs (Ma'dan) who protected them,” she pointed out.

In 2000, the Syrian regime deregulated land use and gave vast quantities of land and water to its wealthy allies, severely diminishing the water table and driving nearly one million small farmers and herders off the land. Many of them migrated to Aleppo where they are being targeted again.

Also, more than four decades of Israeli occupation have made it impossible to develop or maintain infrastructure for water in Gaza, causing the contamination of drinking water and many deaths, declared Barlow.

In Southern Africa, Botswana is the only country cited among countries that use water as a weapon in ongoing conflicts against Basarwa (indigenous hunter-gatherer people of southern Africa), which is facing the threat of shale gas fracking by international companies. Years ago, when Barsawa were displaced from their own land and yet insisted on returning to the deserts, government smashed their water borehole in an effort to force them back to the settlements. They recently won a case and regained access to water. 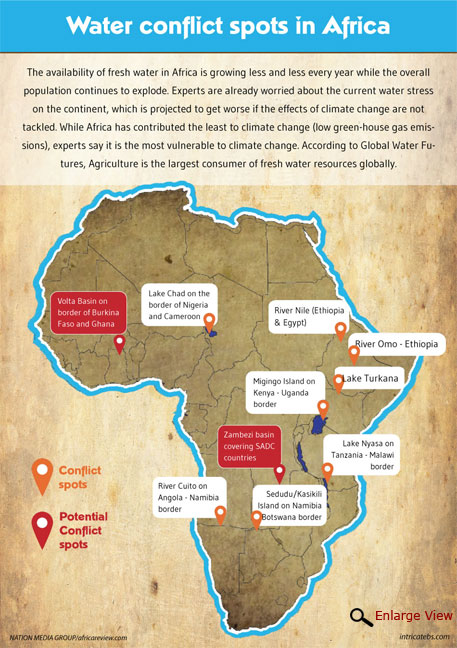 A US report, released in 2012, had said that beyond 2022, says the use of water as a weapon of war or a tool of terrorism will become more likely, particularly in South Asia, West Asia and North Africa. The report had also warned that the upstream nations—more powerful than their downstream neighbours due to geography — will limit access to water for political reasons and that countries will regulate internal supplies to suppress separatist movements and dissident populations.

With only five per cent of the country getting at least 100 millimetres of rainfall per year, Libya is one of the driest countries in the world. But it has a hidden treasure and weapon.

According to reports, lying beneath the four African countries Chad, Egypt, Libya and Sudan, the Nubian Sandstone Aquifer System (NSAS) is the world's largest fossil water aquifer system, covering some two million square kilometres and estimated to contain 150,000 cubic kilometres of groundwater. Fossil water is groundwater that has been trapped in underground fossil aquifers for thousands or even millions of years. And this can trigger further wars in the region that is already facing unrest.

Water insecurity: a threat for Pakistan and India