Where do we dump it? 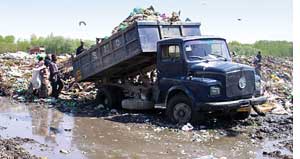 Srinagar is stinking again. The Srinagar Municipal Corporation (smc) estimates that over 4,000 tonnes of solid waste is lying undisposed in Srinagar. On October 10, people living around Achen--the only dumping site the city has had for the last 25 years--initiated a protest, demanding closure of the landfill; they did not want waste to be dumped in their neighbourhood. People have been resisting continuously since then, blocking smc vehicles from entering the area to dispose garbage. On October 27, the city's district administration imposed a curfew in the area so that the city's accumulating waste could be transported to the dumping site.

It was the same story last year.The people protested against the landfill being in their residential area, blocked municipal garbage vans and the waste accumulated. The government asked for a year's time to correct the situation. Now, after one year of inaction, Achen residents have again taken to demonstrating against the dumping site. As a result, an overpowering stench has enveloped the city as the waste remains unattended, mounting in heaps all over Srinagar.


With a population of over 1.5 million, Srinagar generates an average of 448 tonnes of solid waste every day. In the absence of community dustbins, open public spaces and the roads become convenient garbage dumps for people. This is swept away by the 2,180 sanitation workers in Srinagar. The 1,124 hand carts provided to them to carry the waste to a nearby garbage collection point are not enough and have to be shared. smc in its report says that an average of about 250 tonnes of waste is collected from 512 primary collection points every day.

"It is an incompetent system, lacking manpower and infrastructure; 73 per cent of the solid waste generated by the city is thrown on streets, pavements or into open drains and water bodies," said Manzoor Ahmad Turray, Solid Waste Management Officer, smc. "The sanitation workers have to do the collection on a door-to-door basis, sweep the roads and clean a huge network of open drains, which is a daunting task," he added.

Shabir Ahmad Dar, a resident of Safa Kadal in downtown Srinagar, said he had had enough of such glib explanations "Lack of infrastructure and manpower should not be an excuse."

Medical or hospital waste is another matter of concern. There are 15 government and 13 private hospitals, with more than 5,000-bed capacity along with 199 clinics, dispensaries, laboratories and diagnostic centres, all within the jurisdiction of smc. A survey by the All India Institute of Hygiene and Public Health, Kolkata stated 6.5-7.5 tonnes of bio-medical waste is generated by hospitals and nursing homes per day and that 47.2 per cent of this waste is highly infectious.

"In addition to this, 11 tonnes of waste is generated by clinics, dispensaries and pathological labs. Of this 5.5 tonnes is highly infectious." What is worse, bio-medical waste of such hazardous nature is also disposed indiscriminately on the road sides, and it gets mixed and dumped with the municipal solid waste.

Fazal Ali, managing trustee of the non-profit Green Kashmir, said, "The Municipal Solid Wastes (Management and Handling) Rules, 2000, state that biomedical waste shall be disposed of in accordance with the Bio-medical Wastes (Management and Handling) Rules, 1998.As per the rules an institution generating bio-medical waste needs to install an appropriate facility to ensure requisite treatment of waste."

The waste collected everyday is carried by the transport fleet of dump trucks for final disposal to the Achen dumping site. The site is approximately six km from the city centre and is spread over an area of 30.63 hectares.


On April 5, 2007, residents around the dumpsite took to the roads, demanding its closure. Initially, people blocked the movement of smc trucks on the road going to the dumpsite. Things turned violent and in the clash that followed, thirty protesters and seven policemen were injured. The State Pollution Control Board took note of the matter and ordered smc to ensure segregation of waste, monitor groundwater quality around the site and construct a proper drainage system.

On October 9, 2007, the municipal authorities came to an agreement with the residents wherein the smc agreed to close the dumpsite within one year. The deadline expired on October 8 this year. As smc continued dumping waste at Achen it led to a replay of last year's protests and waste pile-up.

Under the Municipal Solid Waste (Management and Handling) Rules, 2000, it is clearly stated that "municipal authorities shall establish and maintain storage facilities in such a manner that they do not create unhygienic and insanitary conditions around it". Abdul Majeed Sheikh, a resident of Achen, said, " smc pays no heed to municipal solid waste rules. Their way of disposal is illegal and unscientific. All kinds of wastes are just dumped, spread and levelled by the bulldozer." Fazal Ali added, "The landfill site itself is a violation. You can't have it within a city."

Mian Javid, regional director of the pollution control board, said it had ordered smc to arrange for a scientific disposal of the waste.


Srinagar is situated on the banks of the river Jhelum and has a host of lakes such as the Dal, Nigeen, Anchar, Gilsar and Khushalsar. There is a heavy traffic of houseboats and shikaras giving a tour of the lakes. However, the unavoidable fact that lies beneath the beauty is that these waterbodies have been serving as sewers for a large quantity of the waste being generated by Srinagar. smc in its report confirmed that 44.2 per cent of the waste generated does not have collectors, vanishing into waterbodies through a huge network of open drains.

Hilal Ahmad Kuchay, field officer with Centre for Human Development, a Srinagar-based non-profit, said, "We are working on a project on the Dal Lake, authorized by the Jammu and Kashmir Lakes and Waterways Development Authority to clean the solid waste seen floating on the lake. 60 sewer drains pour into the lake along the Dalgate-Saida Kadal water channel, transmitting a chunk of solid waste."


To overcome the problem of solid waste disposal, the Jammu and Kashmir Economic Reconstruction Agency (era) came up with a short resettlement plan called Municipal Solid Waste Collection and Disposal Site Development. This was after the smc mayor, Salman Sagar, approached the office of the Jammu and Kashmir governor N N Vohra's office, on October 24 for his intervention. The plan aims at constructing new access roads to the dumpsite, resettlement of the people living in close vicinity of the landfill and investment in physical infrastructure.

The Asian Development Bank in 2006 approved a project to aid in building engineered landfills with efficient drainage systems. It also agreed to provide some basic infrastructure, including garbage containers and dumpers to smc through era. However, there is a big question mark on the placement of these containers as the already existing ones have been placed on roadsides. One such bin is placed on the main road in front of Ali Mohammad's general store. "The dumper is not cleared for days; the garbage spills over, scatters, and the whole road stinks. I have requested the smc authorities to shift it from here, but no one seems to care."

At present the municipality is disposing garbage collected from important commercial areas at Achen under heavy security. smc is also constructing an alternative road to the landfill which may take five months to complete. Meanwhile, garbage in most of the city remains unattended.