How climate change has pushed the koala towards ‘Endangered’ status 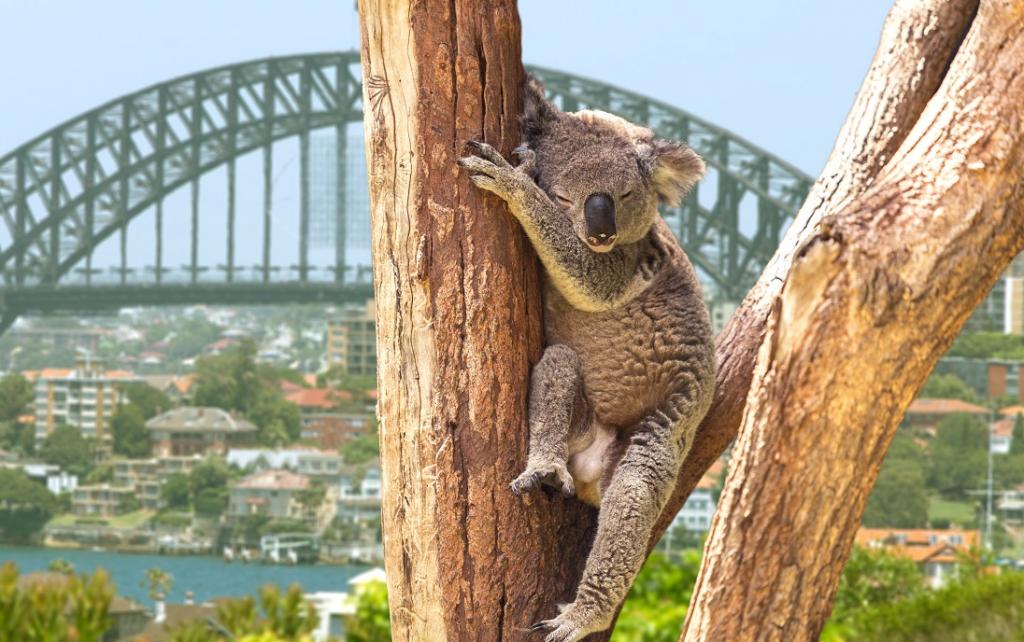 A koala against the backdrop of the Sydney Harbour Bridge. Photo: iStock

The Australian government declared the koala (Phascolarctos cinereus), the cute marsupial that is the very symbol of the country, as ‘Endangered’ in the states of Queensland and New South Wales as well as the Australian Capital Territory February 11, 2022, according to media reports.

The country’s environment minister, Sussan Ley “pledged to work toward a national recovery plan for koalas”, according to a report by news website Bloomberg Quint.

The koala has suffered greatly in recent years due to habitat loss, disease and most of all, bushfires. Chlamydia, a bacterial disease, has wrought havoc on koala populations by forming cysts inside breeding adults, leading to infertility.

But the biggest culprit has been the bushfire season of 2019-20, known in Australia as ‘Black Summer’. It killed billions of animals and organisms. An estimated 143 million mammals, 180 million birds, 51 million frogs and 2.5 billion reptiles were affected due to the disaster, according to the World Wildlife Fund for Nature (WWF).

More than 60,000 koalas were among the animals impacted by the bushfires, according to a report commissioned by WWF-Australia.

The Bloomberg Quint report said there are now fewer than 500,000 left in the wild, according to the International Union for Conservation of Nature’s Red List.

The Australian Koala Foundation says the real number could be below 60,000, it added.

The Commonwealth Scientific and Industrial Research Organisation (CSIRO), an Australian Government agency responsible for scientific research, has this to say about the role of climate change in the 2019-20 bushfire season on its website:

Climate change doesn’t cause fires directly but has caused an increase in the occurrence of extreme fire weather and in the length of the fire season across large parts of Australia since the 1950s. In addition to 2019 being the driest year since records began in 1900, it was Australia’s warmest year. In 2019 the annual mean temperature was 1.52 °C above average.

The impact of climate change has led to longer, more intense fire seasons and an increase in the average number of elevated fire weather days, as measured by the Forest Fire Danger Index (FFDI). Last year, saw the highest annual accumulated FFDI on record.

Bushfires as well as forest and wildfires have been on the march globally in the past few decades due to global warming.

Besides Australia, California, the US Pacific Northwest, the Canadian province of British Columbia, Siberia, North Africa, Greece and Italy have all witnessed such events in the recent past.

India too has been witnessing such events, especially in the Himalayas.

Forest fires in India usually happen because of heatwaves, dry conditions, lack of moisture and lots of dry leaf cover. My personal opinion is that these must be increasing as arid conditions rise across the Himalayas. Temperatures are increasing in the mountains faster than the plains.

Rajeevan noted that India did not have proper documentation of forest fires across its territory.

“This is largely because we don’t consider these fires to be as important as other events such as cyclones, monsoons and heatwaves,” he said.

Not that Indians are not studying this phenomenon. “The Indian Institute of Remote Sensing in Dehradun has been doing a commendable job in calculating such fires through satellite data,” Rajeevan said.

He added that these fires would increase in the future because of global warming.

And they would cause great damage.

“Not only koalas, all slow-moving species which cannot move fast will be victims of forest and bushfires. Reptiles, ground birds such as partridges and francolins, koalas, sloths which cannot escape, will be consumed by wildfires,” Ananda Banerjee, wildlife conservationist, who works with the Wildlife Trust of India, a non-profit, told DTE.

“We usually focus on charismatic species, rather than lesser taxa (amphibians, reptiles, etc). But the impact of climate change is first felt on them and goes unnoticed,” Banerjee said.

He added that forest fires would especially affect grassland habitats within India’s protected areas, “because we burn grasslands to regenerate grasses.”

“I once wrote a piece once on how hog deer used to outnumber chital in the Corbett Tiger Reserve. But circumstances and factors including indiscriminate burning of grasses reduced the hog deer population,” he said.

Nikhil Devasar, an ornithologist, said not just ground-dwelling birds but the entire food chain is affected in the event of a fire.

A report prepared for the New South Wales government in June 2020, titled Koala populations and habitat in New South Wales had warned that koalas would become extinct in the state by 2050 without adequate support.

It appears that such a scenario could now occur before 2050 in the light of the latest development. Not just that, climate change could push many other species in the world and India to early extinctions.