Kanpur’s Kurmas: This pond in the heart of the city is a turtle haven

A turtle population flourishing in a pond in a straggling, unplanned city is no less than a miracle, say experts 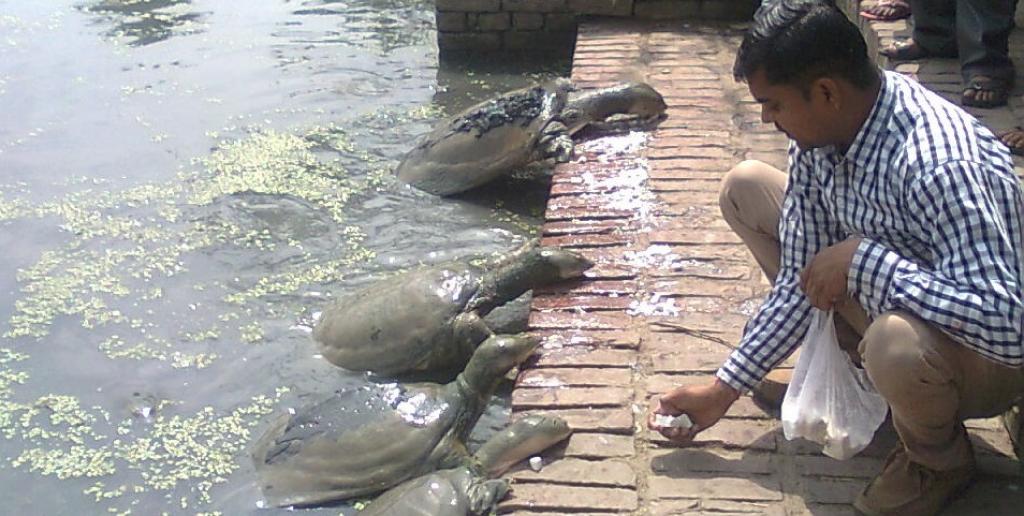 At a time when water bodies in India are either shrinking or vanishing, a pond surrounded by a concrete jungle in Kanpur has survived and is home to a thriving turtle population.

Turtle are an endangered species and possessing or catching one is banned under India’s Wild Life (Protection) Act, 1972.

Kanpur is known for its industries and Panki is one of the industrial neighbourhoods of the city. Not too far from the factories is the squarish pond, each side measuring some 60 feet.

On one bank of the pond is a temple and its owner, caretaker and priest is Devi Dayal Pathak.

“My ancestors migrated from Sindh in Pakistan to the area that is now Kanpur in the 1750s and settled in Panki. They constructed the temple on the bank of the pond some 200 years ago. As the pond is much older there is a possibility that the turtles may also be a century or more old but things are yet to be verified by a wildlife expert. Till date, no expert has visited the pond,” Pathak said.

According to him, some of the turtles have shells that are three feet long. Pathak says he once tried to lift them but found them too heavy. “Going by their size and weight, I think they are quite old,” he said.

Pathak is not sure about the number of turtles in the pond. “There may be hundreds in number,” he said.

The surface of the pond looks blackish green and going by the colour, it is hard to believe that the pond supports a rich aquatic life.

The turtles have started responding to human voices. It is a Tuesday afternoon and many people have gathered at the pond to feed them. Tuesday is considered an auspicious day for feeding turtles.

Ripples break the calmness of the surface. Then, there is some disturbance on the surface close to the bank. Finally with a splash, a turtle appears, perhaps the biggest and the boldest one — its pink mouth wide open.

It hungrily devours the cottage cheese that people are offering. Soon, another one appears. Then, a third. In less than a minute the bank is lined with turtles.

Once the stock of cottage cheese exhausts, people start throwing loaves of bread at them. But the turtles have developed a taste for cottage cheese and ignore the bread. One by one, they start returning to the depths of the pond. Soon, the surface of the pond is once again calm.

“The turtle is much revered in Hindu mythology. It is mentioned in some texts that the earth rests on the back of a giant turtle. In some, it is written that the turtle is an incarnation of Lord Vishnu. Many Hindus believe feeding turtles will help them in getting salvation. Hence people feed them,” said Pathak.

“Whatever may be the reason, it is good if the people are feeding the turtles. Try to imagine the loss if people stop feeding them. They may starve to death,” he added.

Because of their religious beliefs, Hindu devotees ensure that nobody harms the turtles. Also, people living close to the pond consider them as their pets. “It is not unusual if a small turtle sneaks into a home. It is safely returned to the pond,” says Pathak.

In the past, some people have tried to poach the turtles but were chased away by locals.

RK Singh, a senior official with the Uttar Pradesh Forest Department, said a turtle population flourishing in a pond in a straggling, unplanned city was no less than a miracle.

“Where in Kanpur can a person today see a turtle? Either in the zoo or in the Ganga,” said Singh.

“Once, Kanpur had hundreds of ponds. Most of them have disappeared over the years. But if there is a pond that supports a big population of turtles, then it is something very unique. And we must remember that till date no government or any organisation has protected the pond or the turtles. Still, both have survived for such a long time. Steps must be taken to preserve the pond and the lives in it,” he added.

The Uttar Pradesh government has sanctioned Rs two crore so that the pond can be preserved and protected and developed as a tourist spot.

“A protective boundary wall will be built on the sides of the pond. Rain is the only source of water for the pond at present. Pumps are being installed that will draw water from the ground and fill the pond. The water level in the pond will then remain constant throughout the year,” said Pathak.