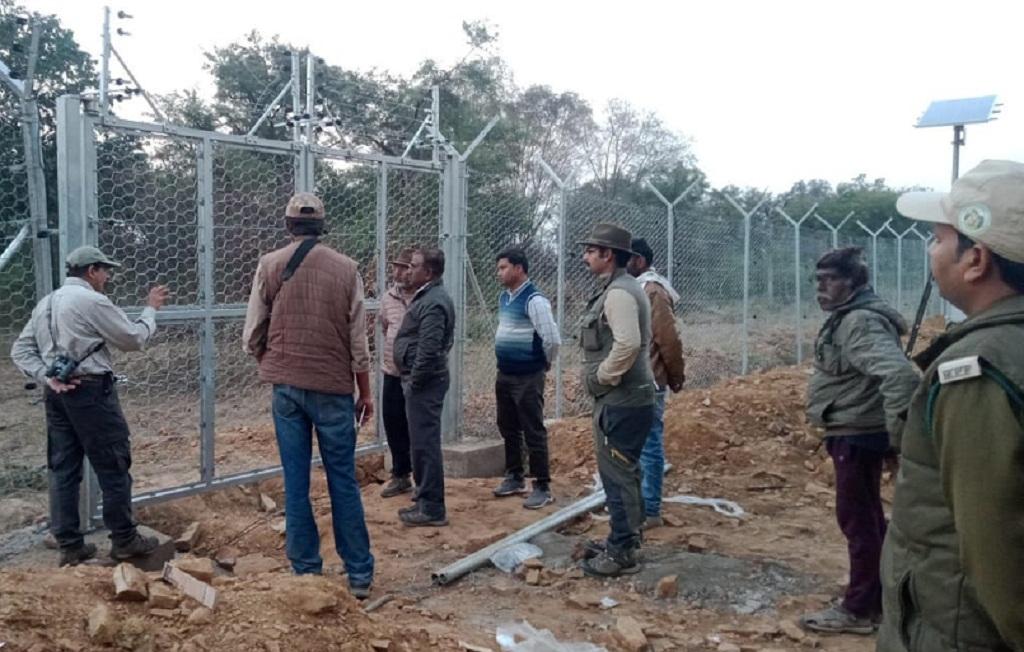 Construction of two helipads by the PWD of Sheopur is also ongoing inside the park. Photo: Kuno National Park

After a struggle of 25 days, the Kuno National Park authorities were able to capture two of the three leopards trapped inside the 500-hectare enclosure.

These leopards may threaten the cheetahs being brought to India from Namibia and South Africa, probably in the coming month, so they need to be relocated.

The authorities plan to electrify some part of the fence, marking the periphery of the enclosure, if the leopards continue evading them once the cheetahs are here.

The authorities called for two elephants from the Satpura Tiger Reserve August 14 to look for and tranquilise the leopards and relocate them to Madhav National Park, Madhya Pradesh.

One leopard was tranquilised August 26, 2022 and moved out of the cheetah enclosure, while the other was given a clear passage and moved out on August 27, night.

“It is not predictable if and when we will be able to remove the third leopard from the enclosure. To ensure that there is no conflict between the two predators, we will energise the outer fence,” Prakash Verma, divisional forest officer (DFO), Kuno, told Down To Earth.

The fence will carry 7 to 8 kilowatts power, which will pulse through the outer fence to deter the leopards from wandering near the enclosure, he further added.

“This is called energising. If a leopard comes close, it will receive an electric shock and will be thrown off. The idea is to train leopards to keep away from the enclosure,” added the DFO.

The current is sufficient enough to give an electric shock to the leopards but not strong enough to kill them. These electric fences are also used across the country to keep away elephants. The top of the fence will be energised as leopards jump very high. Since cheetahs cannot jump that high, there is little to no threat to the cheetahs from the electrified fence, he explained.

The construction of two helipads by the Public Works Department of Sheopur is also ongoing inside the park as the cheetahs are speculated to arrive either at Gwalior or Jaipur and then will be airlifted to Kuno.

The animals may arrive by the second week of September, Verma added. He refused to give a date, saying that the Union Ministry of Environment, Forest and Climate Change was coordinating with the two countries and the actual dates have not been revealed to the Kuno authorities either.

A Memorandum of Understanding (MoU) with South Africa is still pending. “The MoU is pending signature following an inspection of Kuno National Park by government officials from South Africa. This inspection will happen within the next two weeks,” said Vincent van der Merwe, manager, Cheetah Metapopulation Project.