A photo of the dead tusker showing the burn wound on its ear. Photo: TN Forest Department

Two persons have been arrested and a third is being searched for after a 40-year-old tusker died January 19, 2021 due to burn injuries near the Mudumalai Tiger Reserve (MTR) in Tamil Nadu, its field director told Down To Earth.

The two arrested persons have been identified as Prasath and Raymond Dean, according to a note by the Deputy Director of MTR. They belong to Mavanallah. The third person has been identified as Ricky Rayan, who is currently away from the area. A case has been registered against all three under the Wild Life (Protection) Act, 1972.

The tusker, that had sustained injuries to its back and ear, was being shifted to a relief camp for treatment by the state forest department, when it collapsed and died, unable to bear the trauma, KK Kaushal, the field director of MTR, said.

The post-mortem examination done the next day showed a burn wound on its ear lobe. However, the primary cause of its death was septicemia that had set in due to the wound on its back.

The tusker had been roaming human habitations in Masinagudi near the MTR in the Nilgiris district from November onwards, Kaushal said.

“On observation, it was found to have a festering wound on its back. It was given medicine through fruits. With the permission of the Chief Wildlife Warden, it was tranqualised, treated and released. Though its wound showed some improvement, it continued to remain in the villages and at times used to block the main road,” he said.

The animal was tranquilised January 19 with the help of two veterinarians and three Kumkis or trained elephants, in order for it to be taken to Theppakaadu elephant camp for further treatment.

But by the time the lorry reached the camp, the tusker had breathed its last.

The incident took place January 19. The next two days, two videos circulated on social media, one of which, according to Kaushal, ultimately led to the arrests.

On January 21, a video had begun to circulate on the microblogging site Twitter that showed a forest ranger weeping while holding to the trunk of a dead elephant in Tamil Nadu.

On January 22, another video began to circulate showing people in a location in Tamil Nadu throwing a burning tyre at a tusker.

Absolutely horrific. The people running a private resort throw a lit-tyre on a 50-year-old #elephant in the #Nilgiris, that died as a result of the injuries it suffered. @SanctuaryAsia @nehaa_sinha @elephantfamily @Mugilan__C pic.twitter.com/YE8UI8dBIi

“The video that is circulating on social media and has gone viral on TV channels, had landed in our hands yesterday morning itself. Based on that and the corrobrative evidence, two persons have been arrested today,” Kaushal said.

One is the main accused who threw the burning torch on the elephant’s ear and other is the younger of the two persons who were guiding and instigating him from behind.

The two persons who have been arrested in connection with the case. Photo: TN Forest Department

“This is not the first time an elephant has died from fire or firecrackers. Ecological balance cannot be restored through violence. Anyone caught harming or killing animals must be punished to the fullest extent of the law,” Manilal Valliyate, the chief exceutive of animal rights organisation, PETA India told DTE.

The Wild Life (Protection) Act, 1972 prohibited the hunting of elephants, including not only killing but also capturing, coursing, snaring, trapping, driving, or baiting a wild or captive elephant or attempting to do so. An offence against an elephant was punishable with imprisonment for three to seven years and also with a fine not less than Rs 10,000, Valliyate noted. 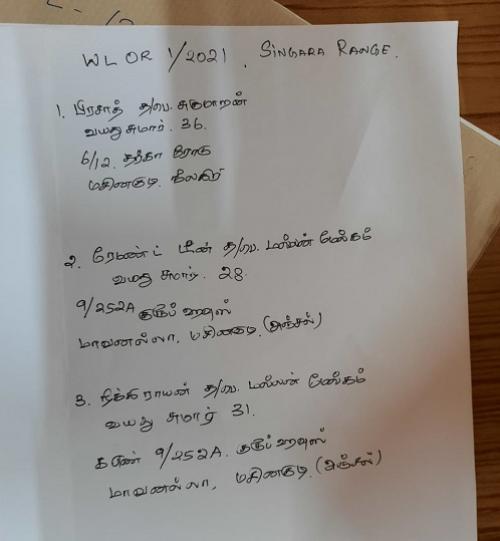 The details of the three accused in the case. Photo: TN Forest Department

“Humans are invading animals’ homes, not the other way around. Town and farm planning must take into account protecting jungle homes. There are countless humane ways to protect crops and human habitats, including fencing, noisemakers or in the case of elephants, planting chili peppers on the perimeter,” Valliyate added.