What is the best time for rhino translocation in Assam? December, says study

Adult rhinos are the best candidates for translocation, a new study has said 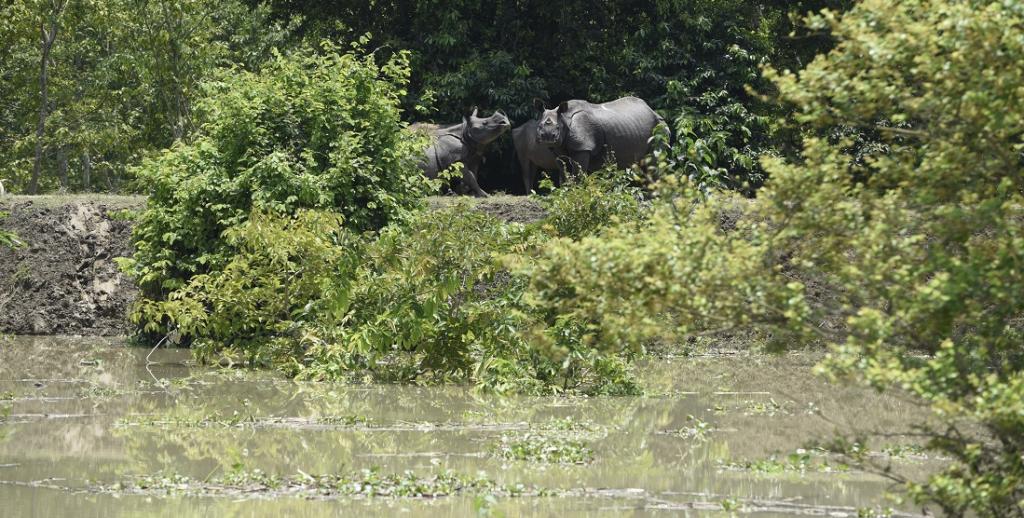 Rhinoceros and other animals take shelter on higher ground in Assam during floods. Photo: istock

December is the best time to translocate the rhinoceros of Assam, as flood waters subside by that time, according to a recently released study. Adult rhinos are the best candidates for translocation, according to the study.

The study was recently published in the Pachyderm journal. Pachyderm is a bi-annual, international, and peer-reviewed journal that deals primarily with matters related to African elephant and African and Asian rhino conservation and management in the wild.

It is also a platform for dissemination of information concerning the activities of the African Elephant, the African Rhino, and the Asian Rhino Specialist Groups of the IUCN Species Survival Commission.

The study addresses the knowledge gap regarding the behavioural traits of animal behaviour which is crucial to wildlife conservation practices.

The study was carried out in two protected areas in the Brahmaputra river Valley: Kaziranga National Park (KNP) and Burhachapori Wildlife Sanctuary (BWS).

The study was carried out during the high flood periods (June, July, and September) of 2016 in BWS and 2017 at KNP.

Following the death after the monsoon floods in 2016 of a lone sub-adult female translocated to BWS from KNP, the study compared the behaviour of this individual during high flood periods to that of other adults, sub-adults and calves in KNP in 2017.

A rhino reintroduction plan was developed under the Indian Rhino Vision (IRV) 2020. The goal of IRV2020 was to increase the rhino population in Assam to 3,000 by establishing populations in new areas.

The study found that during the high flood period, adult rhinos of KNP spent most time resting that may be a behavioural response to overcome stress during this time.

The study observed a new behavioural category, not reported in previous studies, ie swimming.  Both calves and sub-adult rhinos in KNP and especially the lone BWS sub-adult female rhino were observed to swim frequently from one highland to another, despite the heavy floodwater current. The motive for these movements  may  have  been  to  eat  the  aquatic plants  or  (in  the  case  of  KNP  individuals)  to avoid other animals.

In contrast, adult rhinos were almost never observed swimming. They remained on the highland refuges, appeared sluggish and hardly moved. We surmise that the minimal movement of adult rhinos was not only a tactic to overcome stress, but also behaviour learned from previous experience of high floods that it is safer to remain on the raised areas and not to attempt to escape by swimming against the strong current.

Adult rhinos are the best choice for translocation rather than a sub-adult or a mother with a calf as adult animals have better survival capabilities than others.

The results of this study also suggest that the ideal time for rhino translocation would be early December.

“This would allow areas to recover from the effects of floods in June-September, while allowing newly released rhinos sufficient time to settle in their new habitat before the next monsoon starts,” the study said.

Our observations highlight the need for further research on how food availability, food intake and rhinos’ nutritional requirements are affected by periods of flooding and the implications for the health conditions of rhinos. The rhinos’ anomalous behaviour during flooding also suggests that it would be useful to study how other species are affected by flooding and, more generally, the effects on species’ behaviour caused by other evolving natural phenomena affecting the area.