In 1672, while England and France were at war, Henry Oldenburg, the secretary of the Royal Society in London, wrote to the Dutch scientist Jan Swammerdam thanking him for a gift. Wartime restrictions had held up the shipment in transit and it had suffered substantial damage. But the Royal society records echo its secretary's gratitude at receiving the mangled present: a human uterus injected with wax. The gift was among the transactions of a loosely bound network of European scientists. Empowered by the experimental method and new technologies like the microscope, they overturned the old theories of Aristotle and Galen, parted with the alchemists and laid the basic framework for the modern understanding of reproduction.

Historians of science have tended to find Swammerdam's wax-injected uterus less significant to the emerging modern science than the mathematical formulae in Newton's Principia, or the seeds and moulds in Robert Hooke's Micrographia. For many, the Dutchman's anatomical preparations seem to sit uneasily somewhere between the freak show and the research laboratory. But not for Matthew Cobb. Anatomical specimens, he argues in this book under review, were vital to theoretical debates that would eventually lead scientists to understand the way sperm and egg combine in mammalian reproduction.

Swammerdam countrymen, Anton van Leeuwenhoek and Regnier de Graaf and the Danish biologist Nicolaus Steno are the other characters in Cobb's story. The scientists identified the first pieces of the reproduction jigsaw by unravelling the role of the mammalian ovary in the production of eggs. But they hit a wall when nothing of importance could be found in semen. The next important leap required a methodological development to allow scientists to see beyond that visible to the naked eye. This was made possible by the invention of the microscope and its application by Leeuwenhoek to biological studies. Leeuwenhoek first discovered the existence of microorganisms, and later found spermatozoa in semen. 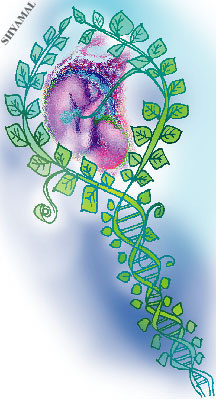 But the relationship between the scientists was not always amiable. While his box of specimens was en route, Swammerdam was involved in an acrimonious priority dispute with de Graaf. Both had dissected and described the structure of ovaries--or "female testicles" as they called them. The Royal Society agreed to arbitrate and ruled in favour of a third contender: Steno. This was because the Danish scientist had been the first to publish his findings. Besides, both Dutchmen were wrong in identifying the enlarged follicles in the ovaries with the eggs themselves.

Anyhow, the eggs were there, and so was the sperm, after Leeuwenhoek's discovery, but the insight that they contribute to the formation of new life was missing. And after Leeuwenhoek, momentum stalled. Steno moved on to Florence, where he became the star of Grand Duke Ferdinando de Medici's scientific academy. After dissecting dogfish and rays, he proposed that the ovaries of the human female contained eggs that passed into the uterus. Swammerdam, meanwhile, focused on insect development.

It took 150 years before the pieces laid out by the Dutch and Danish scientists were put together. In a final chapter, Cobb summarizes the progress and vacillations that followed the "golden age" of anatomical and microscopic investigation, culminating in the unravelling of the genetic code and the start of cloning technologies. These, Cobb concludes, are the legacies of Steno, de Graff and Swammerdam.

Cobb is among the rare scientists who write on history. "Studying the history of biology enriches my research and provides an invaluable perspective for understanding today's problems," he writes in his web page. He peoples his history with a variety of dedicated enthusiasts for the new disciplines. There are vivid descriptions of the intellectual hothouses of Europe such as Leiden, Florence and Paris.

But Cobb's strong suit is science. His pages come alive when he delves into experiments, scientific works and the cross-fertilization of ideas made possible by new scientific journals and debating societies.

He is not as strong on history. His tour of the history of 17th century European scientific revolution is so dizzying that one ends up somewhat disoriented after undertaking it. The account is made up of a series of disparate, sometimes overlapping tales, a few of which end down blind alleys.

Anyhow, the book is well worth reading. It is suited both for scientists and lay readers, although some might find the scientific detail a tad heavy.