The first chapter of this book begins with an announcement. "Wind power has arrived," it says. The proclamation is, perhaps, a bit too late. Wind energy has actually been big for more than a decade or so. Globally, and in India, the sector has witnessed substantial growth in the last five years.

This progress has been the subject of long-drawn sessions at many conferences. Wind energy has been the most privileged among all renewable energies. It has received maximum attention and perhaps maximum promotion. This book is another example.

There are two very simple reasons behind the wind energy sector's growth: aggressive promotion and business. That's well known. But what many studies--including the one under review--fail to acknowledge is that the economics of wind energy was changed by policies in Germany.The exponential growth of the sector in Germany, and a few other European countries like Denmark and Spain, revolutionised the business model of wind.
The upside began with the introduction of the feed-in-tariff system in Germany, a levy pushed through by the Green Party once it became part of a coalition government. Feed-in-tariff is an aggressive promotion system which ensures that power distributors and utilities pay producers of renewable energy a significantly higher tariff. The introduction of this tariff gave a huge fillip to the wind sector and within a few years it was as, or even more, competitive as most conventional energy systems. It suddenly made business sense and therefore attracted investment which fuelled further growth. It is this aspect which is not adequately dealt with in the book, which is otherwise a nuanced study.

Conceived and edited by G M Pillai, founder director general of the World Institute of Sustainable Energy (wise), a society headquartered at Pune, the book aims to present a holistic picture of the wind energy sector in the country. Pillai has been the visible face of wise, quite literally, and this is reflected in this book too. But what is different about this book, and a little 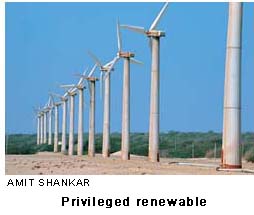 refreshing, is its break-up of topics. It is a fair compilation of the most keyworded topics in the sector.

The somewhat erroneously titled first chapter otherwise presents an overall roundup. It is the second chapter which is the most personalised, and therefore the most interesting. Jami Hussain, who is currently associated with the Indian Wind Energy Association, takes us through those initial years when the foundation of the first windmills was being laid in the country. Hussain's stories are an absorbing account of the happenings at the ground level.

As sites on shore are exhausted in certain countries like Germany the sector is facing its first stagnation. To counter this, the industry is now looking seawards. Experimental offshore wind farms have already been set up in a few countries in Europe and several thousand megawatts of installations are in the pipeline. Industry has set big targets for offshore energy because windmills of far larger capacity are being planned. The environmental impacts of these developments are, however, a matter of intense debate.
Another popular theme on which a chapter has been devoted is carbon credits for wind installations. Wind energy is one of the most deserving sectors for investments through this route. Buying carbon credits through wind installations is a far wiser and better option compared to coal washing or other such practices.

From here on the chapters tread into somewhat lesser discussed areas like investors' and lenders' perspectives on financing, human resource development and capacity building. Two important aspects, socio-economic and environmental impacts, find a mention towards the end.

While it is true that most environmental impacts associated with wind energy have been grossly exaggerated, there are certain issues which merit serious consideration. Aesthetic impacts of wind farms, currently a complete non-issue in India, is a big issue in many countries including the uk and us. The book ends with regulatory and tariff regimes in India and the very obvious: the way ahead.

Not to take anything away from the content, the treatment could have been far more interesting. Visually the book is boring. All in all, this is an academic compilation of discussions on various issues in the wind sector.