Our medical establishment is among the world’s most corrupt. If it’s not hospitals and diagnostics laboratories taking patients for a ride, then there are yoga gurus beaming from television channels, promising to cure everything from HIV/AIDS to obesity. We discuss only the medical treatment of ailments, not how to stay healthy. Because there is not profit—hence no market—in providing good health. Family after family has horror stories indicting a medical establishment running on merely the profit motive without regulation.

The government and political parties do not see a popular issue in this. The popular media never goes beyond exposing a scam or two. If there is an in-depth critique of this systemic rot, it exists only in academic papers written for specialised readers.

N C Asthana, an IPS officer, is on a mission to find sanity in the midst of this noise. His books are entitled to provoke. Yoga and other Quackery Exposed is his 18th book and follows The doctor is cheating you: A devastating expose of unethical malpractices in the medical field. This is his first book with his daughter Priyamvada, a communications engineer. 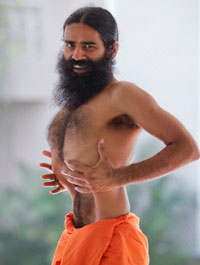 As he declares in the introduction, Asthana is waging a personal war against the lack of a rational and scientific temper in India. He does not blame religion for this, neither does he consider the formally educated more rational. He lays it down to a flawed education system which does not encourage a temperament for science. Asthana is not essentially opposed to yoga. In fact, a large section early on in the book is dedicated to tracing the origins of yoga. What enrages him is perversion of these traditions for profit; he terms it the medicalisation of yoga.

“Patanjali never said that practising Raj Yoga will cure your cancer or you would be able to fly,” he says. Asthana first draws the distinction between what our traditions teach us and what is read into it when people want to make money, and appropriate the respect and legitimacy our philosophy commands.

Asthana’s mission can also be termed an effort to save yoga from the likes of Baba Ramdev. He draws on works of several yoga masters for this; for example, he draws on B K S Iyengar to show that forceful and strained breathing, like in kapalbhati which Baba Ramdev claims can cure several diseases, is wrong. Asthana goes deep into the practices of renowned yogis who never claimed yoga was a system of medical treatment, rather a philosophy to live one’s life.

The book is richly referenced and Asthana is on familiar turf when he writes on science; he is a nuclear physicist by training and a man of many parts, as his self-congratulatory website—thelastpolymath.com—proclaims and as can be seen in the literature references.

The book tackles many supposedly alternative medical systems in 23 chapters. Reiki, acupuncture, aroma therapy, naturaopathy, chelation ... several new age fads are discussed and demolished. Asthana particularly goes for the fads, be they diet fads or medical ones. “Real science is not miraculous. It is sheer drudgery,” he reminds.

He has a chapter reserved for ‘Deepak Chopra’s Pseudo-Ayurvedic Mumbo-Jumbo About Quantum Healing’, which is special treatment because not even Baba Ramdev gets his name in a chapter title. “If something sounds too good to be true, it probably is,” Asthana writes in his last chapter titled ‘Why People Fall For Unscientific, Unproven Systems’.

Not too many publishers are willing to touch authors like Asthana because they are uncomfortable and not easy to sell. It is easier to sell books that promise miracle cures or a new-fangled therapy. But this book makes interesting and useful reading in a time when there is precious little good sense in the world of health and medicine in our country. If the author persists—there is no reason to believe he won’t—he might end up creating a market for sensible discussions on health.

Sopan Joshi is an independent journalist in Delhi