The Socialist Register has come to acquire a special place, globally, as an annual document bringing together state-of-the-art thinking within the left. So it's a welcome step that the register has come out with an edition focusing exclusively on human-nature relation. But what is surprising is that it took the Socialist Register 43 editions to bring out a volume like this.

That said, Socialist Register 2007 Coming to Terms with Nature is a thought provoking collection of articles written from a wide range of political and ideological positions within the left.The range of topics covered is also fairly extensive with climate change, fossil fuels, renewable energy, agriculture, water, carbon credits, natural disasters, garbage, consumerism, environmental politics and sustainability being covered in the 17 essays in this volume. Reams of papers have been spent on these issues. But these essays do bring a new insight into the environmental debate the issues are seen through the prism of class analysis, and the relation between environmental damage and capitalism is brought into focus.

Five of the articles stand out for their relevance to India. Neil Smith looks at the manner in which 'freely available' natural goods are commodified, and argues that "Capital is no longer content simply to plunder nature" but is moving towards replicating and producing nature and natural goods in laboratories and factories. He calls this process "the real subsumption of nature". Smith explains "This involves not just the production of nature 'all the way down', but its simultaneous financialisation 'all the way up'". This he describes as the "vertical integration of nature with capital".

Elmar Altvater analyses the dependence of capitalism on fossil fuels and argues that there is no escape from this addiction. His is perhaps among the few left-wing positions which accepts the reality of "Peak Oil". Altvater argues that the transition to renewable energy is not possible under capitalism, specially in its present form of late imperialism. 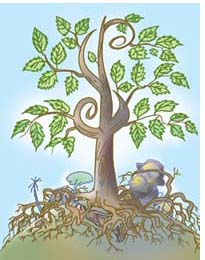 Heather Rogers looks at life after death of the millions of commodities which make our beautiful life. Her essay on garbage is a useful history of how waste (and pollution) caused by proliferating commodities in the us was dealt with in a way that did not obstruct the expansion of consumerism. She is able to effectively show the limits of using consumption as a method of green politics. Costas Panayotakis' essay argues that consumerism is a symptom of an irresolvable contradiction within the heart of capitalism, based as it is on an assumption that economic growth is eternal.

It is significant that this collection of essays, which purports to be a representative voice of Marxist and other socialist thinking on environment and nature, should be populated entirely by academics from the North.This reviewer is no advocate of "third-worldist" or indigenist politics, but the fact that there are no contributions from actual "practitioners" of left-wing politics--whether from the first world or the third--is worrying. Traditionally, the leading theoreticians of left politics have also been its leading practitioners. Therefore, it's a bit disconcerting to discover the total absence of any leftwing activist or politician in this collection.

But this is more than a mere editorial omission. It is a symptom of the intellectual impoverishment of the left that its mass movements no longer throw up theoreticians and organic intellectuals. Environmental issues, whether it be the access and control over natural resources, pollution, agriculture, water, climate change or energy, are directly related to the life and death struggles of the poor and the working classes. This disjoint between the producers of Marxist theory and activists of left movements clearly shows that both are remiss. A correct theory will tend to "seize the masses" while a correct political praxis cannot but throw up its own theoreticians. That both are working in their own separate chambers, strangers to each other, merely indicates the distance the left has to cover before it becomes relevant again.