Excrement is not a dirty word

In his much acclaimed book Call of Nature, Richard Jones reveals the secret world of dung—of humans, animals and birds

We don't talk about it much in polite society; it’s something we do quietly, alone, discretely, behind closed doors. Contrary to popular opinion, excrement is not a dirty word. From a biological perspective, defecation is a fascinating process, and its importance does not stop a the point of voidance.

The fall of dung onto the ground is just the beginning of a complex process of reuse and recycling, and come with its own intricate ecological web as the multiple dung-feeders and scavengers compete with each other, with predators and parasites, and against the clock to make the best use of the limited quanity deposited in each pat.

From these seemingly sensible uses, there now extends a fanciful vista of much odder dug resource possibilities, punctuated with ideas that range from the bizarre to the downright nonsensical. According to tradition, Kumalak, a mystical divination system from Central Asia, relies on a shaman interpreting the patterns exposed when rearranging 41 sheep droppings on a grid of squares. Beans or stones can also be used, but since kumalak actually means ‘sheep dung’ in Turkic, I’d feel rather short-changed if it were me having my future read by a proponent using these modern hygienic alternatives.

Author's interview: 'A dung pat is a mini ecosystem'

Dung, as any macerated and mashed plant fibre, can be readily made into paper. Again, once it is dry it loses any faecal scent, but harvesting sufficient quantities has so far kept this a relatively obscure artisan product. Elephant dung is amongst the most inoffensive of droppings, being little more than pre-chewed plant material, passed in large quantity through a digestive tract that works by removing only small amounts of nutrient, but from a vast throughput. Such was the success of elephant dung paper, that similar products are now created from the dung of crows, horses, moose, donkeys and giant pandas.

On the other hand using elephant dung as a textural splatter in paintings, and for the bulky base of designer platforms shoes, is simply relying on novelty to gain popular attention. Likewise moose and deer droppings, dried and varnished and made into drop earrings, also rely on a headline-catching you-cannot-be-serious factor.

The latest use of the elephant gastrointestinal tract is to partly digest coffee beans, which can then be extracted from the droppings and used, either to make drinkable coffee (under the brand name black ivory), or to be brewed into elephant dung coffee beer. There is still a bit of the gimmicky sensationalist venture here, but these are genuine and apparently successful enterprises, used to bring in hard cash and garner international awareness in the struggle that is 21st century elephant conservation. This is still a cottage industry, but it echoes a similar small-scale operation that is now worth tens of millions of dollars. Black ivory takes it inspiration directly from the natural proclivity of the luwak (the Asian palm civet, Paradoxurus herma-phrodites), a small, mostly arboreal cat-like mammal, to eat coffee fruit in its native range across southern and southeast Asia. 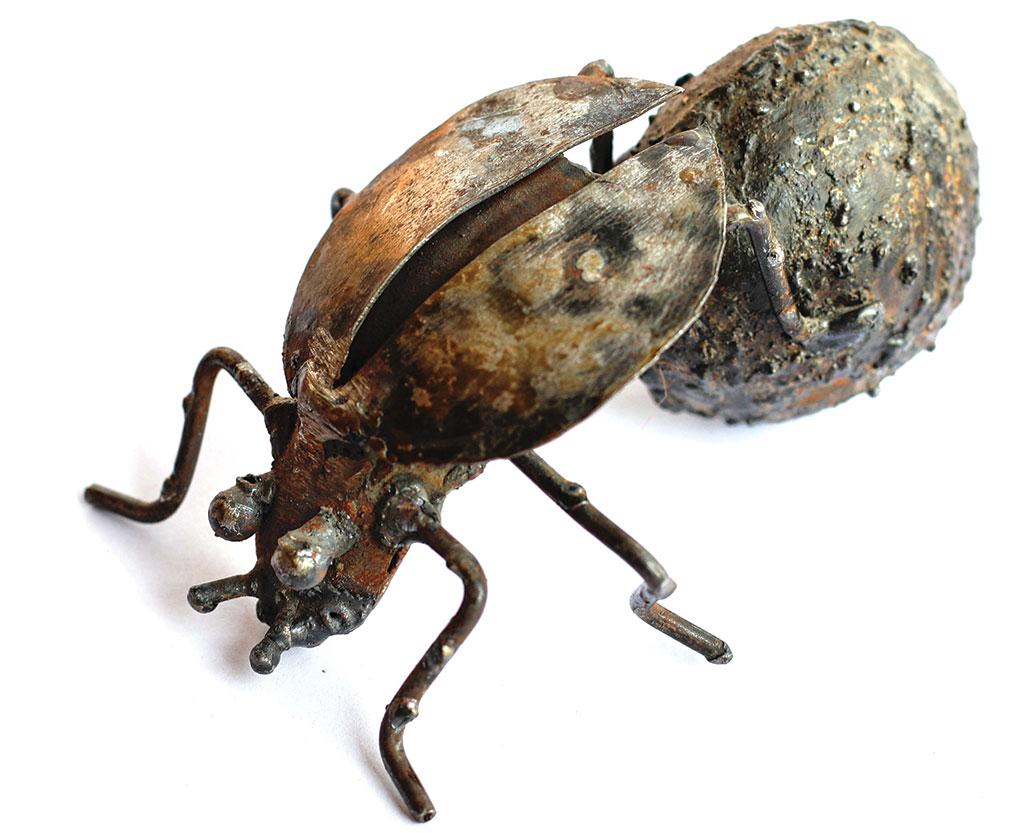 The usual history story goes that when the Dutch planters introduced coffee-growing into Sumatra and Java, in the 18th and 19th centuries, they forbade native workers from collecting the fruit from trees for their own use, such was the high value of the crop. Instead, the local workers collected civet droppings, through which the beans passed almost untouched, cleaned them, roasted and ground them, and made a coffee with an improved aromatic tang and subtle non-bitter taste. It’s the protein content of normal coffee beans which gives the drink its bitterness, and although the nut-hard bean looks unaffected during its pass through the luwak digestive tract the claim is that these bitter proteins are significantly altered by the enzymes in the animal’s gut, producing a unique smooth mellow flavor. The fame of the kopi luwak (civet coffee) spread and it soon became a marketable commodity in its own right, selling today for something like $700 per kilogram; forest-collected wild civet-eaten beans are the highest prized, and achieve the best prices. Civet farming now occurs widely in the region, but disreputably poor animal housing conditions, force-feeding horror stories and fraudulent claims of dubious coffee provenance plague the industry.

In yet another variant, caterpillar teas are available in China—brewed from the frass of caterpillars fed on various plants. This is ‘tea’ in the broader medicinal sense of a hot infusion of crushed leaves (or in this case partly digested leaves) taken against complaints of the spleen and stomach, to aid digestion, or to ease summer heat, rather than in the popular milk-and-sugar cuppa beverage more typically drunk in the UK. However, some enterprising wag has taken to offering tea-bags of the stuff for the export market. Unfortunately I just missed a recent tasting in the entomology department of London’s Natural History Museum, where the general consensus was that it tasted a bit like tea.

I am pretty skeptical about the claims of William Salmon, whose book The Compleat English Physician of 1693 gives details of sheep dung tea used to treat smallpox, jaundice and whooping cough. At the time, this extra-ordinary pharmacopoeia of drugs and concoctions was widely ridiculed for its quackery. However, in a recent Dictionary of Prince Edward Island English (Pratt 1988) sheep dung tea is genuinely reported as a folk remedy given to sick people, along with the supporting claim that this is not a euphemism. I would happily taste kopi luwak, but even I baulk at the idea of sheep dung infusions. The various adulteration of tea and coffee acts (1724, 1730 and 1776) are widely claimed to have been needed because of assertions that ground-up sheep dung was being added to what was then an expensive high-end commodity.

Many would argue that civet coffee, black ivory and caterpillar tea are just riding on the back of their novelty gimmick value, taste tests are notoriously subjective, and people will try anything new, reassuringly expensive and claimed to be exclusive. Similar claims can be levelled against the idea of facial beauty treatments made from nightingale droppings (developed in Japan) and chicken dung (Hippocrates suggested pigeon) used to treat baldness. All rely on the unreliable feedback of desperate, often gullible customers.

Lion dung is marketed for its supposed ability to prevent deer, rabbits, cats or other unwanted animals from coming into private property. Intuitively this may seem plausible: the rationale is that these annoying pest animals instinctively recognize the smell of a dangerous predator and stay away. The trouble is that lions are not native though most of the Western world, so no instinctive recognition of their smell could have evolved in the local fauna. According to the website of the British Deer Society, lion dung is very smells (as is that of most carnivores), but ineffective. To my mind, human excrement would seem a more logical choice to deter undesirables in the garden. It also has the added benefit of attractive dung beetles. Try it.

Urine is another important biological product that humans have utilized over the millennia. Apart from its important role in leather tanning, it was also used as a cleaning agent because after a time the urea in it breaks down to form ammonia; this specially aged urine (lant) was also used for wool scouring (washing). Combined with straw it was an early source of saltpeter for gunpowder manufacture. Alchemists tried to distil gold from urine, possibly something to do with the yellow colour of the liquor, and although this was ultimately unsuccessful, it did lead to the discovery of the element phosphorus by Hennig Brand, in Hamburg, around 1669.

There is a long-running debate, now probably relegated to the status of myth, as to whether Indian yellow, a rare pigment used in oil painting in the 18th and 19th centuries, really was made from the urine of Indian cows fed on a diet of mango leaves. The leaves genuinely contain a substance mangiferin, a flucosyl xanthone, which is converted by herbivore digestion to bring yellow xanthenoids similar to euxanthine, the scientific name of the chemical pigment. How-ever, whether this ever happened on any commercial scale is uncertain, mainly because mango leaves are quite poisonous to cattle, and it would have been just efficacious to extract the colour by the routine treatments of macerating, boiling with chemical additives and then purifying by evaporation. It is quite likely that the urine anecdote was invested (or at least enhanced) by someone wanting to keep the arcane mystery surrounding a lucrative and exotic commodity.

There is, however, no doubt over the origins and utility of dominant-buck or ‘doe-ub-oestrus’ urines, which are used sold as scent lures for the US deer-hunting market and are widely available in high-street stores there. And in Sudan, cow urine is used as a hair dye, tinting the local Mundari herdsmen’s normally jet black hair a scorched red colour. Of course, urine is still widely used, diluted with water, as a liquid fertilizer on the allotment, but those tales about it on sea-urchin spikes of jellyfish sings are all nonsense.

This article was first published in the 16-31st December issue of Down To Earth under the headline 'What will they think of next’.