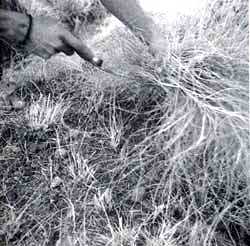 I AM not a botanist and being a Bengali with a particular inclination for non-vegetarian food, I almost shared the sentiment, "Grasses are meant for cows." But reading Grass Evolution and Domestication has been an interesting experience. Reading this book, one is made to realise that the "grass family" is a "magnificent resource" -- one that has far from been sufficiently explored.

Grasses are our most important plants, both for agriculture and sustaining fragile environments. Our daily lives involve activities in which the grass family (Poacae) has a multidimensional role. There are religious, economic, historical, political and various other facets of our intimate relationship to the family of grasses; from this common family, a number of species have been domesticated, including cereals, and -- in the order of edible dry matter -- wheat, rice, maize, barley, sorghum, oats, rye and the 16-odd millets.

Not only are these cereals consumed directly, a significant proportion of the so-called coarse grains are fed to livestock for high quality proteins in the form of milk, meat and eggs. Other than cereals, a number of other grasses have been domesticated: bamboos, which have almost innumerable uses, and sugarcane, perhaps the most important in terms of material value and socio-political impact. Several species of grass have been grown for their aromatic oils: lemon grass, citronella grass and vetiver.


Vetiver has recently been vigorously promoted for the control of soil erosion and moisture conservation. And there is the saying: "Nothing in biology makes sense except in the light of evolution." Although the known fossil records of grasses is not extensive, it is generally believed that they originated in the Cretaceous period, about 66 million years ago, perhaps in the forests or in the forest-savanna ecotones. Fossil records suggest that the taxonomic diversity of grasses were well-established by the Miocene period.

Since there is a "full array of supragenetic taxa" in each of the continents, it has been suggested that the major groups split up before the continents drifted apart. The diversification of grasses and adaptive radiation probably coincided with global climatic shifts. Diversification is also associated with the co-evaluation of ungulates.

Compared to the origin and spread of grasses, domestication is a recent phenomenon, confined to the past 10,000 years and to relatively few species. But the choices made by the Neolithic farmer have proved to be remarkably durable. Without their achievements, the settled societies in which art and science flourished could have hardly done so. Agriculture probably arose because of the pressure of need.

As our requirement for food increases, agriculture draws intellectual resources; domestication is being viewed as not a one-shot event but as a continuous process. Traditional plant breeding has a record of which its practitioners are justly proud. How then do the newer techniques of biotechnology relate to it? Clearly, it is not a case of either/or.

The book explores this emerging synthesis. A collection of 11 papers, it is divided into 2 parts. Part I views grass taxonomy, the origin and diversification from an evolutionary angle, with particular reference to photosynthetic pathways, cytogenetics, self-incompatibility and inflorescence. Part II examines the domestication of grasses. Three important cereals -- wheat, maize and rice -- are considered model systems to explore interactions of plant breeding and molecular biology. This book is essentially meant for botanists; and it turns on its head the phrase, "...put out to grass".

Bhanusingha Ghosh is a freelance writer