Most irrigation bureaucracies believe problems of farmers end once water is delivered on to a block of land. Irrigation is an essential component of agriculture but it is not neutral. More often than not it reaches rich farmers. This can affect poor farmers unless there is concerted social action to counter the effect. Introducing farmer managed irrigation systems (FMIS), too, has not helped.

This has been amply elaborated in Controlling the Water: Matching Technology and Institutions in Irrigation Management in India and Nepal, spread over 12 chapters by different authors. 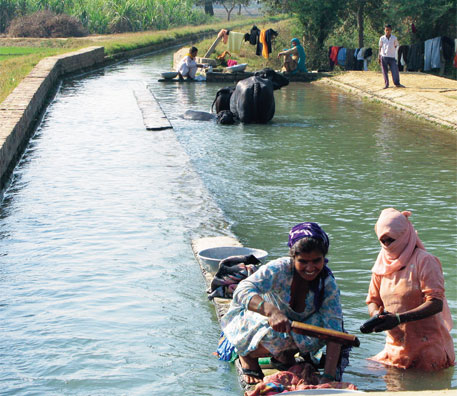 Through Warabandi and Shejpally irrigation systems practised in some villages of Haryana and Maharashtra, Vishal Narayan brings out the problems of allocation of canal water, its rotation, rationing, distribution, pricing, lending as well as policy gaps.

Bala Raju Nikku discusses why the “big bang” approach of irrigation adopted by Andhra Pradesh in the last decade failed. The system assumed that mismanagement of irrigation could be addressed by shrinking the irrigation bureaucracy, increasing water charges and transferring maintenance of infrastructure and water distribution to elected water users’ associations (WUAs). But WUA leaders were hesitant to take over the role and engineers did not want to lose control over distribution.

Irrigation schemes were also transferred to WUAs in Nepal to improve the performanceof official agencies. Pushpa Raj Khanal narrates how the traditional background of farmers at Panchakanya and Khageri irrigation schemes in Chit awan district and their ability to sort out differences led to better performance of WUAs, while the WUA of Nepal West Gandak Irrigation Scheme in Nawalparasi lost its acceptability due to corruption and inability to resolve conflicts.

Umesh Nath Parajuli calls for attention to three FMIS near the foot hills of Nepal. Farmers there divert streams to fields with the help of weirs with adjust able width notches and define water share according to their labour input in constructing the structure.

Suman Rimal Gautam highlights how farmers in Nepal’s Rupandehi district have resorted to conjunctive use of groundwater and surface water after they faced water scarcity following installation of deep tube wells between 1975 and 1999.

Dug wells started drying up in Sangpura village in Gujarat’s Mehsana district in the 1960s, following which rich farmers switched to deep tube wells. Anjal Prakash discusses how this choice of technology weighed heavily in favour of big farmers and poor farmers suffered.

Esha Shah and R Manimohan talk about the much glorified tank irrigation system in Karnataka and Tamil Nadu. It employed labourers who were kept in perpetual servitude. Mining and deforestation in Tamil Nadu led to soil erosion and sedimentation of tanks, causing more problems for the labourers.

Jyothi Krishnan discusses the dwindling of traditional irrigation system in Kerala’s Palakkad district. Groundwater exploitation has led to unsustainable and inequitable water use patterns, affecting property rights over land and water in the region.

The chapter by Ameeta Regmi and Linden Vincent focuses on two micro-hydel schemes in Nepal’s Khabre Palanchowk district. While traditional social fabric and influence of the elders led to a better functioning of one, the other one failed due to weak organisational setup.

At the end, Peter Mollinga concludes that intellectual and institutional odds are still largely against practising science. He offers suggestions for further research.

Land, water and labour are the three components of agriculture. Control over the first two by landlords always keeps the labourer or the sharecroppers on their toes. To safeguard the interests of the labourer, the essays demand policy tilt in their favour.

The many ideas it presents makes the book an interesting read. A chapter on irrigation on the Indian side of the border with Nepal would have added to its value.