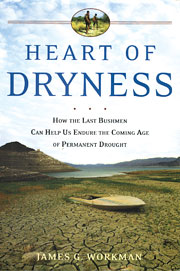 BOOK>> HEART OF DRYNESS • by James Workman, Walker and Company • US $25

In 2002, Workman, who was previously a speechwriter for the Clinton administration and worked on the groundbreaking report of the World Commission on Dams, set off for the Kalahari Desert in search of a coping strategy for water scarcity. The secret to quenching the world’s thirst, according to him, lay in the hands of an ancient people, the Bushmen.

Workman cleverly and humorously places himself as the “Dudley do-right” Ame rican who sets out to help the Bushmen by smuggling wat er into their camp in exchange for information about their way of life. Caught in a conflict between Botswana attempting to push the “uncivilized” desert people out of the desert and the desert people not wanting to leave, Workman weaves a narrative—compellingly heavy on facts and history—that reveals water as a weapon. On the one hand, you have the Botswana government, who under the guise of wanting to “free” the Bushmen from having to “chase after water”, declares war on them by blocking their access to water in the Kalahari. On the other hand, the Bushmen, refusing to submit to the force of Botswana President Festus Mogae, use their age-old knowledge and desert skills to squeeze water from, as the title states, the heart of dryness. 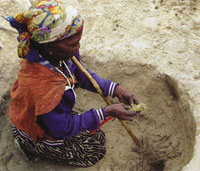 For instance, Workman writes that the Bushmen learned to adapt to a dry environment by practising dry sanitation, dry hygiene and dry health. They would clean cookware, knives, utensils, and pots by scouring out the interior with sand, and would also scrub babies and children.”

Moreover, Workman says, “Many times we think, ‘oh, the poor Bushmen they are living hand-to-mouth, they are living day to day,’ but they are freer than you and I because they aren’t subject to a monopoly. They don’t depend on one entity who they don’t know, and who you and I don’t know, to supply them with what it takes to survive.”

The author is the omniscient narrator and predicts an inescapable and impending drought—an urgency that works well for the plot, but pragmatically seems a bit too apocalyptic. “I define drought differently, more like a layperson. A climatologist may say, ‘Oh, drought is when there is this much water.’ For me, it’s when there is more demand, more thirst for water, than there is supply. And we are definitely heading towards that.” says Workman.

So what’s the secret of dealing with water scarcity? According to Workman, taking ownership of water at an individual level is the Bushmen’s secret to surviving permanent drought.