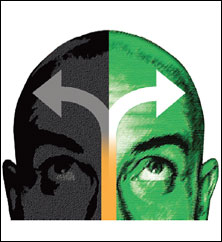 A new decade. For me¤ three decades of work in environment. I wonder: have matters improved since the early 1980s¤ when I began? Or¤ are things worse off? Where do we go from here?

Two things are evident. First there is no doubt that environment holds centrestage in the country. It is talked about extensively¤ considered in policy; frankly nobody today would dare to say they aren’t environment friendly.

Car companies sell their products for luxury and sustainability; real estate giants boast about rainwater harvesting systems; Bollywood stars dance their fondness for all things green. And governments say they want low-carbon economies for the future. Being green is the ‘in-thing’.

This is an achievement of three decades of activism but a key difference as well. In the early 1980s there was some awareness about environmental issues but these were thought fringe marginal seen at best as a fad of some lovers of bees and birds.

Indeed¤ the latter was the more well-known trademark—the ex- shikari who’d graduated from hunting wild creatures to being passionate about their survival. But¤ second¤ in spite of this phenomenal rise in green consciousness¤ the real matter is going from bad to worse.

The pollution in our rivers is worse than three decades ago. The garbage in cities is growing¤ even as governments scramble to find ways to reduce plastic and hiding the rest in landfills in far-off places. Air pollution in cities is worse and toxins hurt our bodies. The report card is not good.

Perhaps the only sector which can claim success is forest protection; remote sensing data shows green areas are growing. But such protection has come at the cost of local economic growth of people who live in and around these areas. The poorest people of India still live in its richest forests. Clearly¤ not the way ahead.

We are failing in two ways. First¤ in managing the ecological fallout of economic growth—the pollution and toxification¤ which comes from generating wealth. Second¤ how to use the wealth of the natural environment to build economic wellbeing¤ what I call the development challenge of environment.

This is really because we¤ as a society¤ have to now graduate to not just caring about environment but also doing something. Very difficult: the answers will not come easy or cheap.

They will require a new understanding of the way we do things¤ tough policies which change the direction of growth and difficult choices we make in our personal lives. This is the crossroad.

These are the same choices the environmental movement of rich countries asked their countries to make¤ some two generations ago. They failed. This is why the challenge of climate change remains a challenge.

Today¤ these societies are rich¤ they have cleaned up their streams and their black smoke. But their economic growth and their lifestyle is putting the world at risk and they have no answer to the future because they want to only tinker with the present.

They look for small solutions to the massive problem of increased emissions¤ linked to growth.

The Western environmental movement also has a different history from ours. It began after these societies had acquired wealth. So¤ the movement was a response to the garbage¤ the toxic air or the polluted water¤ resulting from the growth of their economies.

They had the money to invest in cleaning and they did. But because they never looked for big solutions¤ they always stayed behind the problem—local air pollution is still a problem in most Western cities¤ even if the air is not as black as ours.

It is just that the toxin is smaller¤ more difficult to find or smell. They keep spending. Keep investing in technology to deal with the present. As such¤ the rich world’s environmentalists are garbage managers¤ nothing more.

We want to emulate them¤ with fewer resources and far more poverty. We cannot find answers in the same half solutions. This is the challenge of our next decade.

This is why¤ in January of 2010¤ we should remember again the genesis of the real environmental movement of India. It lay not in the garbage of our cities but in the forests of faraway and unknown villages.

But we must then remember that the women of Reni¤ who protected their trees from the woodcutter¤ did not do so to ‘conserve’ the forests. They did so to demand the first right to cut the trees; their local economy was built on the survival of the village forests.

Theirs was a political movement¤ which demanded rights and deepened local democracy over development pathways. It knew that environment could not be protected if development was not inclusive.

The next decade awaits us. Will we drown in our excreta and the spit of our cars and pretend that the problem has gone away? More talk¤ more conferences and more buzz about all things green? Or¤ will we do things differently?

For instance¤ take the modern¤ convenient bus¤ not just celebrate the answer of the fuel—efficient or hybrid car? Find different answers. The choice is ours to learn and make. Only ours.